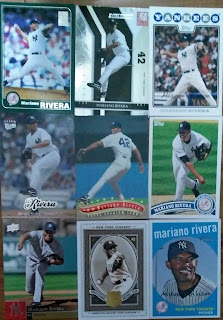 There was a lot of cards of the new Hall of Fame inductees, and I ended up with 15 different cards of Mariano Rivera. I hadn't got a new Mariano Rivera card for something like half a year, because I can never find his cards in dime boxes. 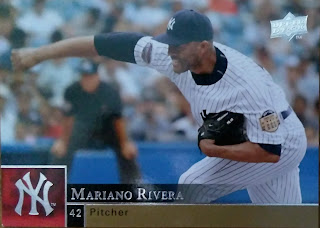 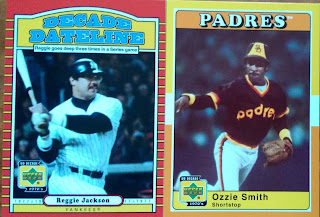 The UD Decade Ozzie Smith is really weird because it listed the wrong batting averages for all his seasons except his last 4. What's really really odd about it is that all the batting were made way higher, marks like .347 and .383. It's like Upper Deck confused him with Honus Wagner. It's strange because if his batting averages were actually that high he'd have a very good argument for being the greatest player ever. I mean, he was a 1st ballot Hall of Famer with a career batting average of .262. 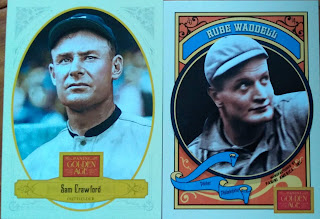 These were two nice looking cards of players from way, way back. I think Rube Waddell is really interesting. He held the single season record for strikeouts in one season until Sandy Koufax. I wonder if he would've struck out 400 batters in 1 season if he just focused on the game. 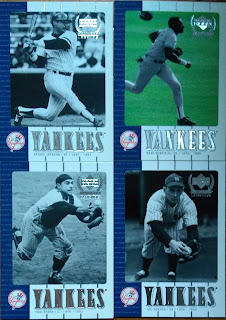 I always love new cards of Yankees like Joe Gordon and Yogi Berra. 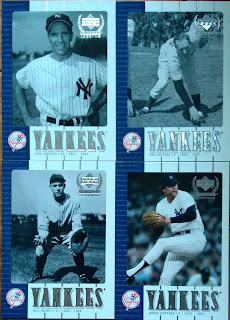 I have at times considered having Phil Rizzuto as my favorite retired player. He's never actually been my favorite player, but he's still one of my favorites probably a notch above Yogi Berra. 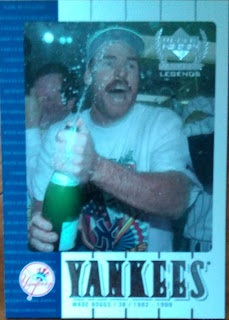 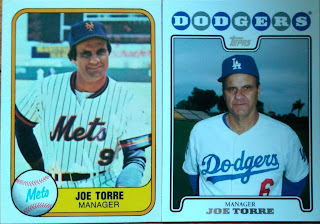 I got to see Joe Torre for a second last night defending the Trea Turner call. I personally wasn't totally outraged about Trea Turner being called out at the time, but I could not understand why they put the runner back at 1st instead of 2nd, as the runner would obviously have been at 2nd. It didn't end up mattering as Anthony Rendon hit a homer right after that and the Nationals won anyway, but it could have lost the world series for the Nationals. My sister really liked this one. It's also my 1st baseball card with a dog on it. 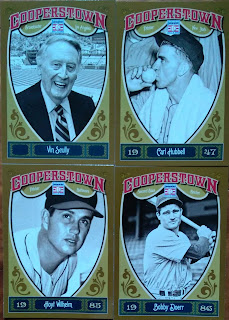 These are 4 really great cards. I really like that card of Carl Hubbell kissing a baseball, and I'm a fan of both Bobby Doerr and Hoyt Wilhelm. I like all knuckelballers because I think it's a really cool pitch, and I also have the knuckelball in my pitching arsenal, although I haven't thrown one in a game all season yet. 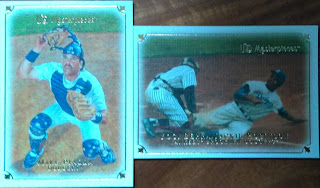 The 2 years of UD Masterpieces are 2 of my favorite sets ever, but sometimes it really annoys me in some ways. For example, Mike Piazza was still playing in 2007, and the card actually says he's an Athletic, but he's pictured as a Dodger, and the season it gives statistics for on the back is from a Dodgers season from about 15 years before. I'd be really, really annoyed about that if I was an Athletics fan. 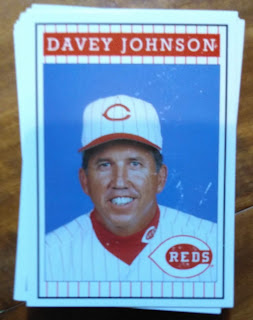 I'll wrap up with some free stuff I got. This is a Kahn's Red's complete set. There isn't really anybody I know very well in this set, but it's still kind of cool. 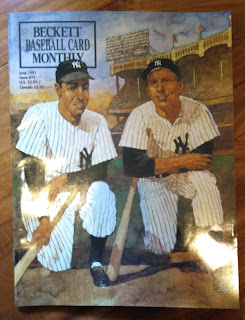 I also got a few Beckett's from the 90's that I liked. There was a lot more content back then, and the price guide didn't take up 70% of the issue back then. 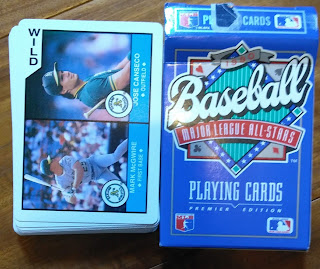 I also got a nice deck of baseball playing cards. There rather cool, and there was one Yankee ( Steve Sax) and one player I collect ( Randy Johnson) in it. Anyway, that's all the stuff I got at my last card show. My birthdays coming up soon ( I have the same birthday as Bob Feller) so stay tuned.