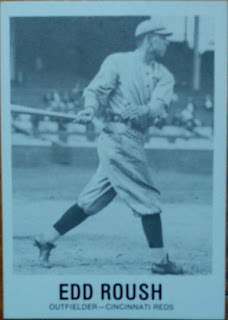 I had a great time at the card show Monday before last. I got a scare at the start of the show, because the only potential dime-box was listed as a quarter box. However, the person selling it let me have them for a dime each, so the crisis was averted. ( thanks!) I got a ton of great cards, like that Renata Galasso Edd Roush. 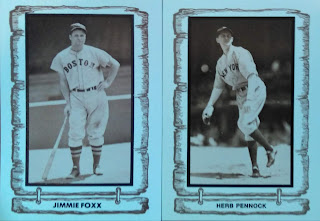 Before the card show I'd only seen cards from this set in a $2 box in a card shop in Cooperstown. I think it's a nice looking set, plus it features a nice amount of rather forgotten players like Monty Stratton. 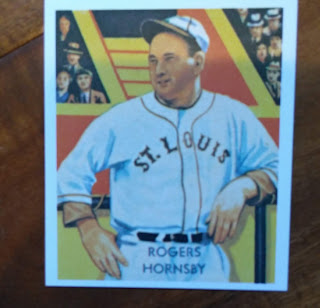 I also got a lot of reprints at the card show, which was awesome. The original of this card would be way out of my price range, but I can still get a reprint of this beautiful card for 10 cents! Though I definitely wouldn't mind a original. 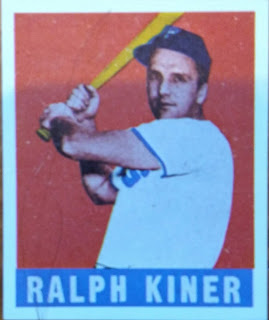 I just got a lot of reprints of great cards. I wish I had more reprints, but I'm slowly building up my
reprint collection. 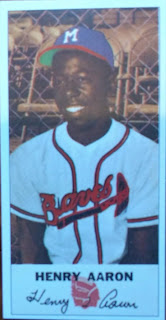 On this card I am privileged, because of this reprint, to see statistics that are not even listed on baseball reference, like RBI's for his minor league days. There is also what I'm pretty sure is 2 statistical errors, as it lists Hank with 29 Home Runs in 1952, while BR lists 9. It also says he drove in 161 runs in 87 games in 1952, which is pretty hard to believe. 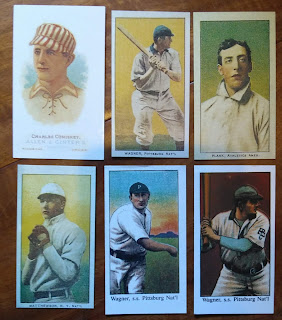 That Allen & Ginter reprint is just beautiful, as are just about all of these 6 cards. 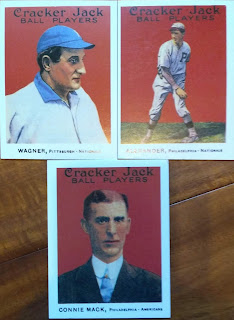 This is a great trio. Pete Alexander, Honus Wagner, and my 1st actual card of Connie Mack. The only Connie Mack "card" I had before  was more like a stamp than anything else.

I've only shown cards of players who played before 1980 so far, so I'll show some more modern cards before I finish up the reprints, because there's still a couple left. 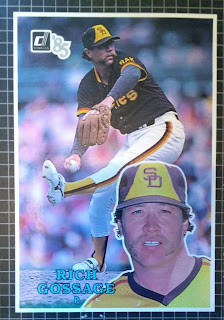 This Goose Gossage was in a box of free stuff, which I got near the end. These are very big, probably more than twice as big or more compared to a regular card.  I also got a few 1986 ones. 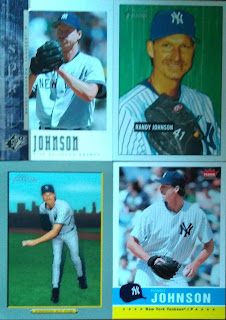 These 4 cards of Randy Johnson were my 1st of him as a Yankee, outside of a league leaders card which he shares with 2 other players. He only played with the Yankees for 2 years near the end of his career, winning 34 games, but he probably has a ton of cards with them. It's nice how one of my favorite players suited up with the Yankees for a while in his career when they were making a lot of cards. If he played for them from 1991-1992, or something like that, then there wouldn't be a lot of cards of him as a Yankee. 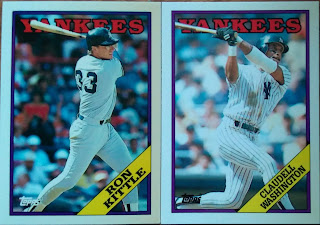 Before that card show I'd never even seen in person a Topps Tiffany card, but there was a decent stack of 1988 Tiffany cards in the dime box. I just got these 2 Yankees, because there was so many cards I wanted in that dime box that I really had to narrow it down. 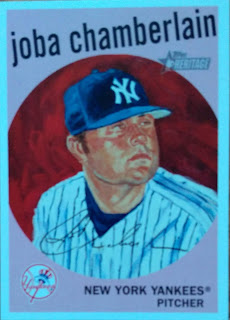 I think this is a pretty interesting card. The back says that the painting was by Dick Perez, the guy who did the paintings for the  Donruss Diamond Kings cards and stuff like that. His paintings seem to be on a lot of cards. 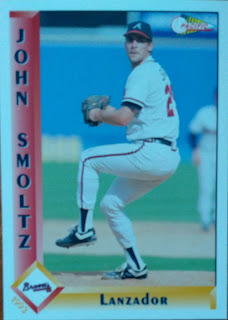 I thought that this is a cool card. It's from 1993  Pacific, a set which is just in Spanish, not even with Spanish and English, like O-Pee-Chee. 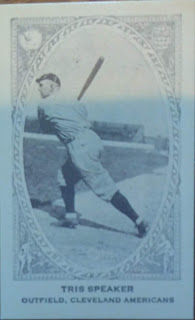 Anyway, I think I'll finish up the reprints now. This is a really nice looking card, though I'm not sure what the original card is. Anyway, I think that it's my 1st card of Tris Speaker. 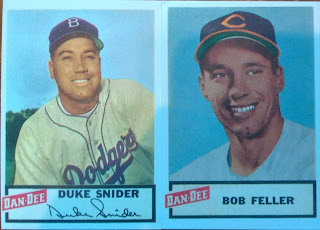 I went to the same card show last year, and I also looked through the same dime box, by the same person. There were some cards that I remembered from last year, but it was mostly new. I got the Phil Rizzuto Dan-Dee reprint last year. 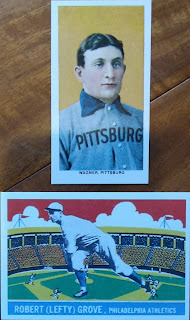 This is the last of the reprints, wrapping up with the 5th Honus Wagner reprint I got, and a cool Lefty Grove card. 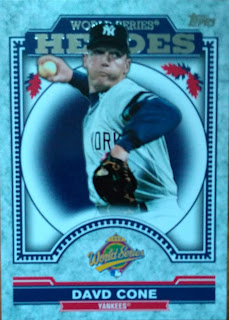 This was a rather marginal buy until I realized that it says "Davd Cone" on the front. It also says that on the nameplate on the back. Things like that really make you wonder. 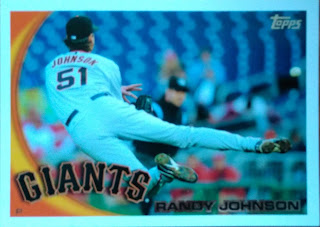 I"ll end this post with Randy Johnson's " sunset card", and also what is now my favorite Randy Johnson card.
Posted by GTT at 3:53 PM