As I have a relatively small collecting budget, but ambitious collecting tastes, I spend a lot of time scouring the internet for deals. Probably too much time, but it often pays off. A while back, I was looking at cards on the Trading Card Database, when I noticed that there was a link to a trading card site called Kronozio. I had never heard of it before, but decided to look and see if there was any good cards. Though it's a smaller site, I was able to find some very good cards, and I made my first purchase from a store called, oddly enough, Frames, Plaques, and more.

Though the prices vary on Kronozio, all the cards I got were below the price on COMC, so there are some very good deals to be found if you're prepared to look a little. 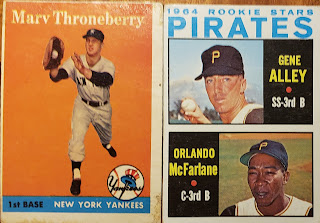 Maybe the most spectacularly priced card was the dual Alley/McFarlane rookie on the right, which set me back a mind-blowing 25 cents! I was also very happy to get a Marvelous Marv rookie for just 70 cents. 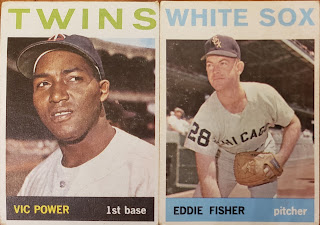 This was my first card of Eddie Fisher, a welcome addition to my knuckleballer collection.
It looks like Topps took a ton of pictures in Yankee stadium back in the day, because it seems like every 7th card features the Yankee Stadium facade. 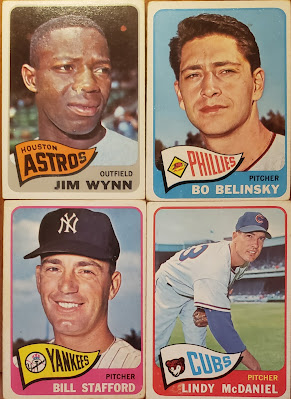 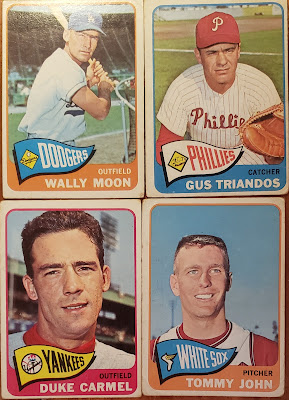 This is a great quartet of cards, notwithstanding the 2 cap-less shots. Any card of Wally Moon is welcome around here, and that Duke Carmel is my first Yankee card of him.
It's jarring to see a young Tommy John. I just now realized something odd: Tommy John never got gray hair during his career. It seems like all the other elderly pitchers, Niekro and Sutton and all, were all graying before hanging up the spikes, but apparently not Tommy John. 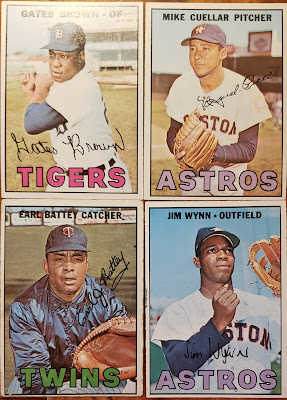 I think 1967 Topps is becoming one of my top-five Topps sets ever, the photographs are just so beautiful. 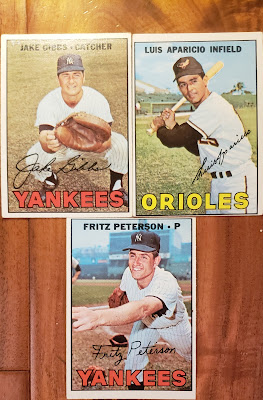 I was pleasantly surprised to get a sharp, if off-center, Luis Aparicio for just 70 cents. And did I mention how beautiful 1967 Topps is?
The seller also had a nice array of '70s cards, most for 25 cents. 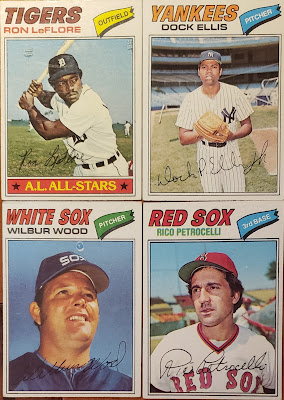 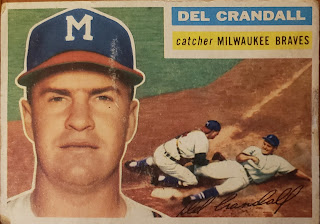 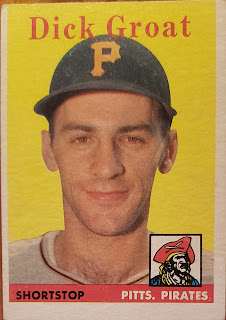 Dick Groat actually played one season in the NBA for the Fort Wayne Pistons, scoring 11.9 points a game over 26 games. But after he got out of the army, the Pirates insisted he stop playing basketball, and he did.
Though all these cards are great, maybe my favorite of them all is the following card: 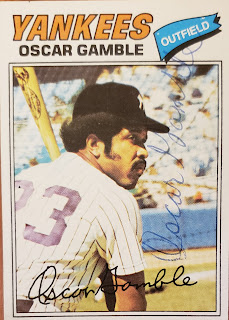 The first thing you probably notice is that, instead of one facsimile autograph, there is another rendition of Gamble's signature down the right side. I'm no autograph expert, but it looks to me like it might be real.
Here are some close-ups of the possible autograph, and the facsimile. It seems to me that there are some definite similarities, and I'm not sure why someone would carefully forge an autograph, just to have the card sold for 25 cents. 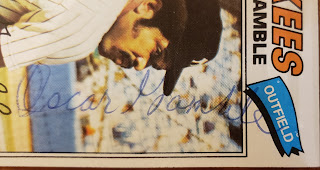 If anyone who know more about autographs has any idea whether it's real or not, I'd really appreciate the help. 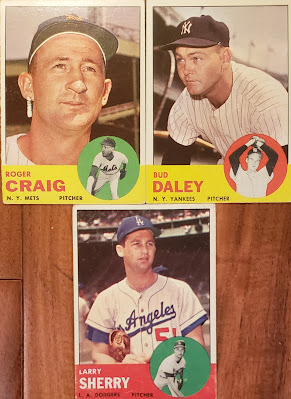 The Bud Daley was my most expensive card of the order, at a whopping $1.10. I was very happy to get the Larry Sherry for just 50 cents, because it's a high number. Actually, getting under-priced high numbers off Kronozio will be the theme of my next post.
Thanks for reading, and have a good weekend!