A great trip to the card shop

I've gone through this before, but I am really blessed to have 2 good card shops a reasonable distance from me. It's nice to be able to physically look through cards, and sometimes you can get some really nice cards.
2 weeks ago I went to Triple Cards & Collectibles, which I go to primarily to make progress on my 1959 Topps set. I got a lot of great cards last time I went, and this visit was no exception.
I got a lot of really good vintage cards this time. They had a $2 box of miscellaneous vintage, and, believe it or not, there was a Reggie Jackson rookie card in there. They didn't let me buy it, because it was obvious it didn't belong. It's possible that the ones I did get weren't meant to be there either, but they didn't want to be cruel and not let me buy any of them. 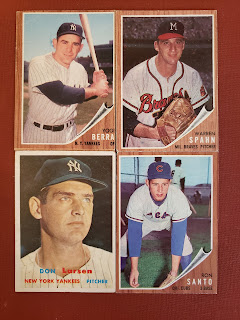 Getting vintage Yogi, Spahn, and Larsen cards for just $2 each was like a dream come true. I actually got 4 of the $2 cards as part of a $7/5 deal, so they were actually even cheaper than that. 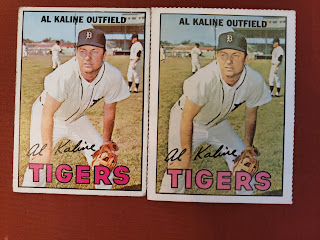 Here's Al Kaline beside a Dover reprint of the same card. Why I also got the reprint will be explained later. 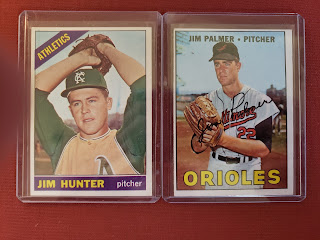 Here's a pair of early career hall-of-famers. I really like the Hunter, because the condition on that card is just so sharp. It isn't perfect, but it feels like it just came out of the pack, the colors are so vivid.  It's especially noticeable on the back. 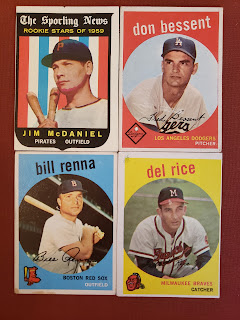 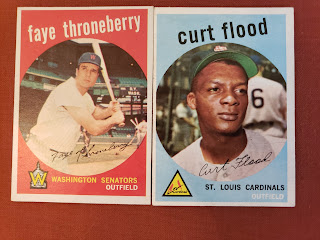 I really like the Curt Flood card. It's a real nice card, and Flood was a very good player and an important figure in the fight for free agency. Faye Throneberry was a high number, and I was happy to get him for just $1.
While I was looking through cards, the owner was looking through a cigar box of reprints, and saying how they were more trouble than they were worth. He then told one of the workers there (or maybe a co-owner, I don't know) that he could take them home, or throw them out, or whatever.
I like reprints, and so I offered to take them. He gave them to me for free, which was very nice. I had a great time looking through them, and there were a lot of good cards. There were about 200-250 cards, and not all of them were reprints. There were also some TCMA cards, and oddball stuff like that. I'll show most of them, so I won't do too much commentary on them to keep the post from going on forever. 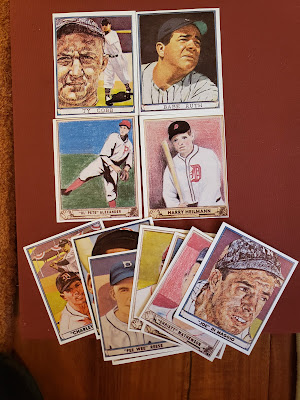 I don't have a clue what these 1940 play ball-ish weird cards are. The artwork is really bad. Ruth doesn't look too bad, but DiMaggio is a fright and Heilmann looks like a kid, which is weird. 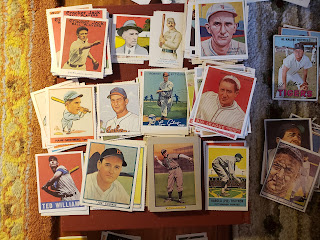 Here are most of the cards, sorted by set. A lot of them were Dover Reprint cards, while the Turkey Reds  and most of the 1933 Goudeys were Renata Galasso reprints, and are very nice. 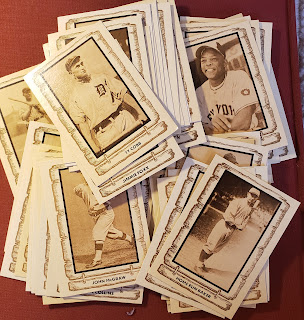 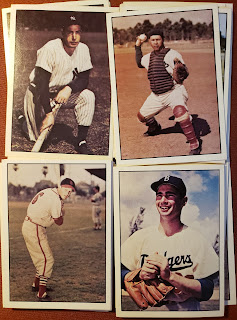 These are TCMAs. They're real nice. 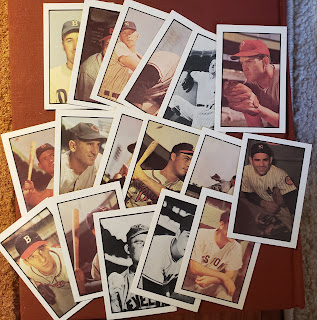 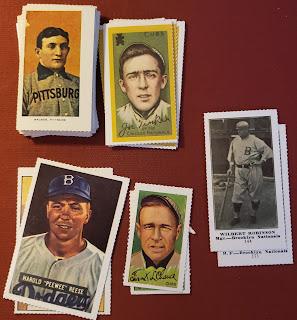 One interesting thing about the reprints is that they were all hall-of-famers. That was nice, of course, but part of me wanted a more balanced representation of baseball from back then. Whatever. I shouldn't look a gift horse in the mouth anyway, and when I really think about it complaining of too many hall of famers is pretty stupid.
It was one of the best trips to a card shop I ever had, but when I went the next week (last Wednesday) I might have gotten even better cards. Stay tuned!
By the way, I'm willing to trade some of the reprints, so if you see any cards you like, let me know, and we might be able to work out a trade.
Posted by GTT at 10:00 AM