Today's my 14th birthday! It's been a pretty good birthday so far, and hopefully will continue that way. For my birthday this year I got a combination of baseball cards and books. I always get baseball cards, but I think this is my first year that I've asked for books too.

I just got 3 cards, but they're real good ones. 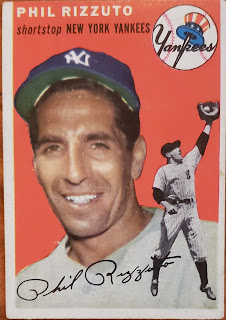 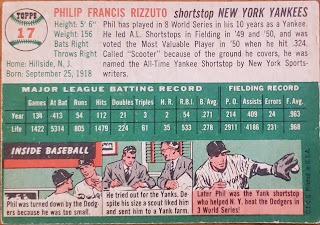 I thought the last line was interesting: "He was named the All-Time Yankees Shortstop by New York Sportswriters." When I read that I realized that the Yankees didn't really have any good shortstops before Rizzuto. Off the top of my head, the best I can think of B.R (Before Rizzuto) is Frank Crosetti, who Rizzuto replaced when Crosetti was just 30. The absence of good shortstops seems strange, because the Yankees historically have had good up-the-middle players, but there it is. Since Rizzuto the Yankees have had Kubek and Jeter. 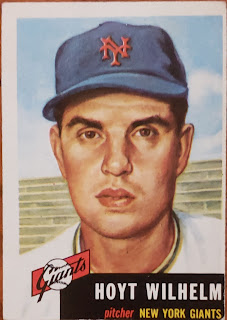 This is Hoyt's 2nd-year card, and it's a very nice card. I originally wanted to see what a 1952 Hoyt rookie would cost, but when I saw it was $500 it went off the list quickly. Oh well. When I'm pitching for the New York Yankees I'll be able to afford it. :) 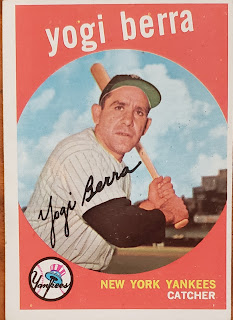 And lastly, I got this Yogi for my '59 set build. It's a great card: a nice shot of Yogi, and it's in good condition. Actually all 3 of the cards I got for my birthday were in good condition, which is nice.
I also got 4 books. I got a copy of the New Bill James Historical Baseball Abstract, which I already have but is falling apart because it's a 1000 page hardcover which has been dropped too many times; the Smithsonian Collection of Newspaper Comics, a good book featuring comics from the beginning to the 1970s; and collections of 2 of my favorite comic strips, Pogo and Krazy Kat, which were both major influences on Bill Watterson of Calvin & Hobbes. 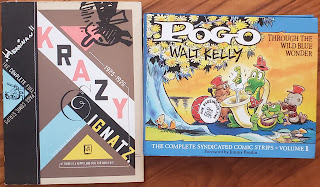 I was very happy with my presents. Thanks Mom and Dad! I also got $20 from my sister, which was very generous. I hope I'll get something really good with that money. I'm also starting to enter birthday card season, so I'll have a good amount of money for baseball cards.
It's been a good birthday so far. Thanks for reading!