A great trip to the card shop (again)

In the last post before my birthday I showed some cards I got from my local card shop, the highlights being cards from a stellar $2 box of vintage cards. A week after that memorable visit, a month ago by now, I returned. Though it's hard to believe that I may have gotten even better cards than last time, I did. 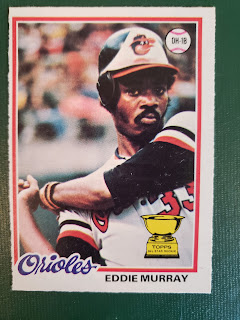 Yes, this is a genuine Eddie Murray rookie card, an O-Pee-Chee copy, plucked from the mysterious row of $2 cards. I expected this card to go the way of the Reggie Jackson rookie card from the last visit, understandably confiscated by the owner. But no. I showed it to the owner, asking what an OPC card was doing so far south. He looked at it, and said it must have gotten in there randomly. Go figure. And the people running this card shop are knowledgeable about baseball cards, so I cannot account for how I got this other than a miracle. 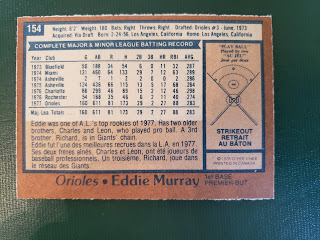 The edges are pretty ragged, as you can see best on the back. This card sells for about $20 on Ebay, which strikes me as a little low for a rare vintage card of a hall-of-famer, but whatever. 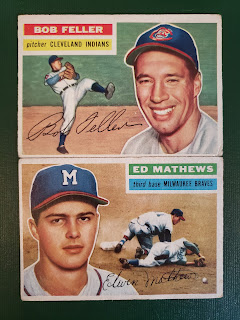 1956 Topps is definitely one of the best post WW II baseball card sets , maybe the best, so getting Bob Feller and Eddie Mathews for $2 each.....  I love the action shot on the Mathews, as it looks like he knocked the ball loose from a Dodgers infielder. 1956 was Bob Feller's last Topps card. 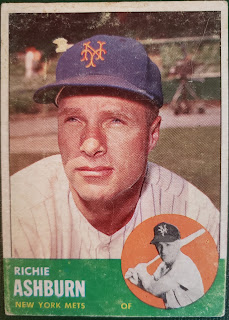 1963 was the year of Richie Ashburn's sunset card, as his last year was 1962, in which he hit .306 and set a career high for home runs with 7. He had never hit more than 4 homers in a season before 1962, and just 22 over all. He retired after that season, though, presumably because he couldn't bear the thought of playing another year for a team which had just lost 120 games. 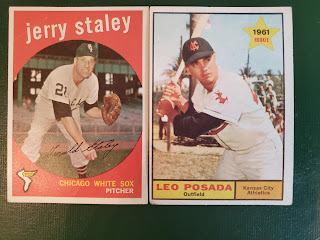 I also decided to get 3 packs of 2020 Topps Big League, as I had seen good accounts of it on the blogs ,and they had packs of it for just $1 each. I personally was underwhelmed. The design is kind of boring, the photography just so-so, and it irks me that there are just 5 seasons of statistics on the back. 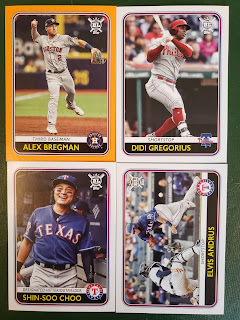 I miss Didi, especially as Gleyber Torres is more of a second baseman than a short stop, but DJ hitting .364 eased the pain. This year was disappointing for me as a Yankees fan. I know 98% of my readers cried for joy at the Yankees' overall meh-ness, but it was tough for me. The Yankees haven't been in the World Series since I was in diapers, so I don't have many memories of the Yankees' glorious past to fall back on. 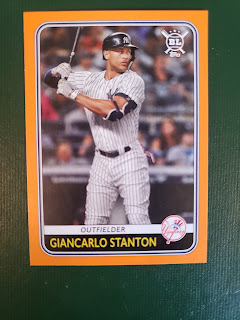 I was very nervous about getting a Yankees card, because I had a bad experience last year where I got a 36 card pack of 2019 Topps which contained the grand total of 0 yankees. For a while it looked as my pessimism might have been justified, as over 20 of the 30 cards had gone by without one. But, thank God, the last pack contained the Orange parallel Giancarlo which you see above.
Over all, this 2nd visit with the $2 box may have been even better than the first.

Since I've been getting such great cards from this shop, I figure I should give them a little free advertising. They're Triple Cards & Collectibles, in Plano, Texas. Here's the link to their Trading Card Database card shop page if you're interested: https://www.tcdb.com/CardShops.cfm?MODE=VIEW&ShopID=151 If you live nearby or are in the area, check them out. I've gotten lots of good cards from them over the past year or two.