Last Saturday I was very disappointed because I had to miss a card show for a practice speech tournament. The tournament wasn't too bad, but going to a card show is one of my favorite things in the world.

However, the disappointment was lightened by my 1st Comc shipment of cards! It was great going through the cards! I mostly got Topps cards from 1954-1960, but I also got three relatively big cards for me. I'll start off by showing what is now the oldest card in my collection, one of the three "big" cards I got: 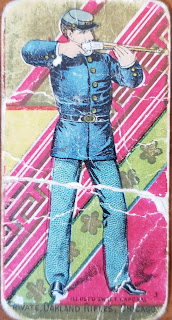 I got this 1887 Sweet Caporal card for less than $5! It doesn't really fit in with anything I collect, but it was really cheap, really old, and the background is very interesting. ( I'll show the other two cards at the end) 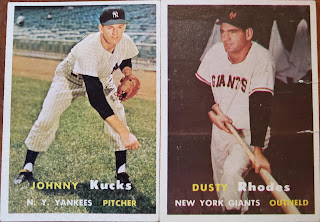 I really like the towels behind Dusty Rhodes, and I like 1957 Topps. I remember way back when when I didn't like 1957 Topps because it was too boring, but I've come to appreciate it. 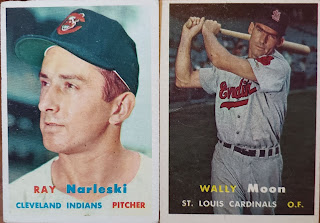 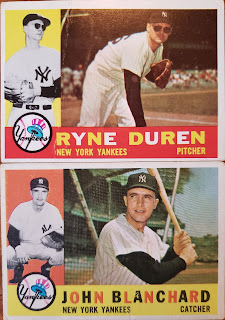 Another set I like is 1960 Topps. It's nice and colorful, and I think the font is very interesting, as it is in different colors and the letters aren't in a perfectly straight line. 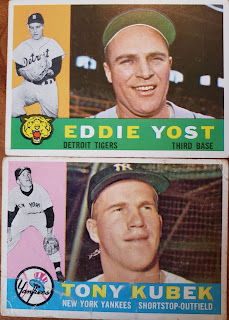 I've always been interested in Eddie Yost, which is kind of funny because I basically never walk in little league. This is my 2nd card of him, and my 1st of him as a Tiger. In 1960 he hit .260, and lead the league in walks with 125, but just spent 2 more years in the big leagues, hitting .215. 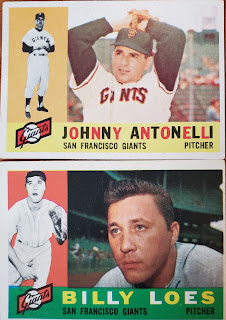 Fun fact for the day: Johnny Antonelli was elected to both All Star games in 1959 ( they had two for a couple years back then), getting the win for the 1st one. 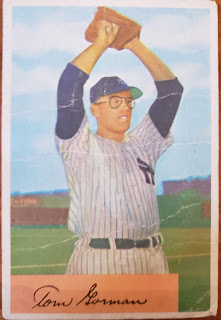 I think somebody drew glasses on my 1954 Bowman Tom Gorman, and it has a lot of creases, but I thought it was a good deal at $1.06. 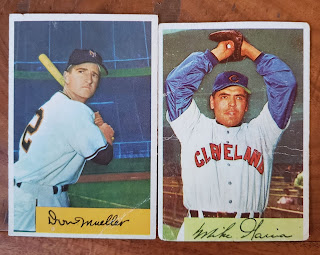 The condition notes for the Mike Garcia card said it was trimmed, but I got it anyway. It's pretty noticeable by a regular '54 Bowman card. 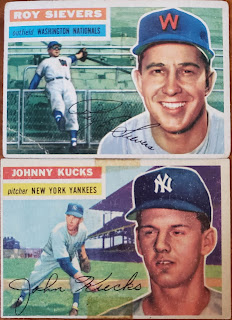 1956 was Johnny Kuck's big year, as he won 18 games, but he never won more than 8 games in the majors outside of that year. He finished his major league career with a 54-56 record. 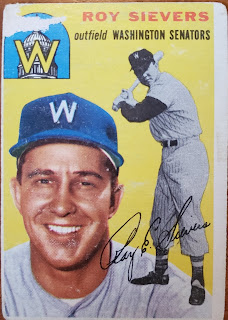 I really like the yellow background on this 1954 Topps Roy Sievers. And here are two "big" cards, which I've probably been overhyping: 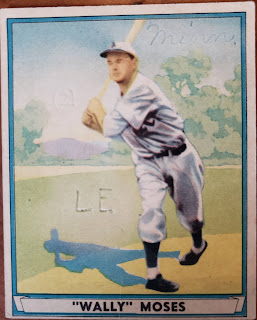 Play ball! I really like Play ball in all of it's 3 years, so these were nice. It looks like somebody carved some random things on the surface of this card, but it's in good condition otherwise, and it was around $5. 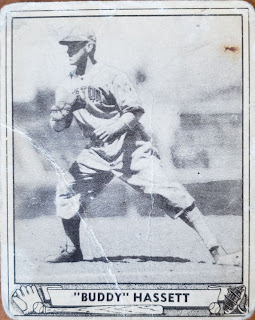 The other card was a 1940 Play Ball card of "Buddy" Hassett. I'd never heard of him before I got his card,  but he hit .292 over 7 years before the war stopped his career, including playing the 1942 season with the Yankees. As a bonus, it's my 1st Boston Bee card, because that's what the Braves were called back then.

I still have one more Comc shipment ( explained in my last post), so hopefully you'll be reading about it soon.
Posted by GTT at 7:26 PM