Baseball cards amid the chaos.

Well, it was a big disappointment to hear that the MLB season was set back two weeks or more. It's always a real pleasure to follow a Yankees game in the evening, and I'll miss doing that. Especially so in summer break, when school is out for me and I sometimes have a hard time finding things to do.

I'm also concerned about my little league season, which is at present delayed, and may be cancelled. For Major League baseball if the season is postponed, you can still play a shorter season, but there is no baseball in a Texas summer (Unless you have a air-conditioned stadium like the Rangers). 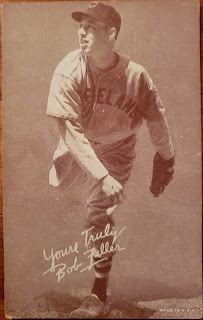 However, throughout all the madness surrounding the Coronavirus, there is still baseball cards, which is comforting. Recently I got a order from Comc, sparked by the card above. What you're seeing is a 1939-46 Exhibits card of Bob Feller, which, when I saw it on Comc for a mere $9, I knew I had to get. I'm a big Bob Feller fan, especially as I share his birthday. He had a pretty great career too, winning 266 games and making it to the Hall of Fame despite being the 1st baseball player to enlist in the army, missing 4 years.

As Comc has flat rate shipping, I got some other cards so I wasn't just getting 1 card. I decided to focus primarily on knuckleballers, as I collect practically all knuckleballers, and I wanted to build up my collection with some vintage examples. They also offer a nice contrast to Bob Feller, who was a flamethrower. 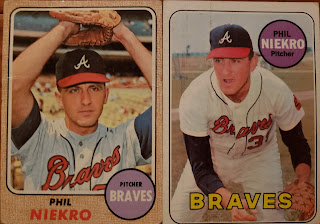 For a guy who won 318 games, Phil Niekro's cards certainly don't break the bank. These two were a mere $2.25 combined, which I count as a genuine steal. Phil pitched until he was 48, which is incredible however you look at it. 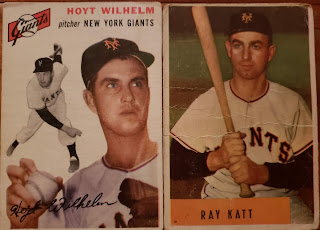 I also added a couple of Hoyt's to my collection, as he's won of my favorite knucklers. Ray Katt was kind of a random buy, but I'm pretty sure his 1954 Bowman rookie card was the only card in the set without a facsimile autograph. 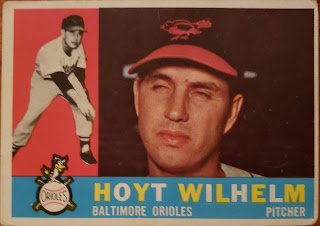 I guess the glare got in Hoyt's eyes. Not sure how many other cards there are with the player's eyes closed. 1959, the year before, Hoyt was a full time starter for the only season in his career. He actually did very well,  winning 15 games and posting a ERA of 2.19, best in the league. 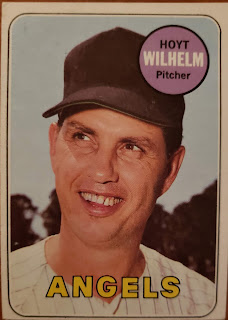 I personally think it's weird how Hoyt bounced around so much at the end of his career, though he continued to pitch well. I've noticed, just from poking around on Baseball Reference, that that happened to a decent amount of older relievers around that time. Maybe it's just that many teams took their relievers for granted. 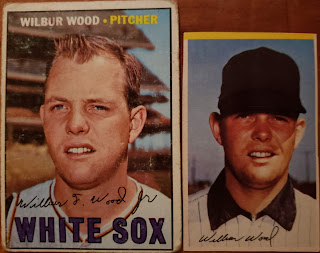 The card on the right is from a obscure issue from 1969 that was supposed to be pasted into an album, and is very thin.

The day I got this package I also received an autograph return from Bobby Shantz, which I'd been putting off for too long. I was definitely glad to get it, as Shantz was both a MVP and a ERA champ. He also won 8 straight gold gloves from the start of the award to the end of his career. 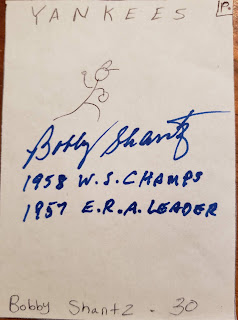 Thanks Bobby, and thanks for reading!