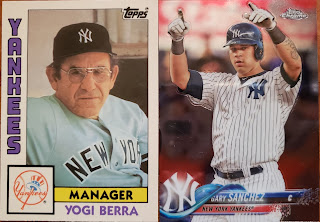 Nearly exactly a month ago, a little before all the Coronavirus stuff started,  I went to a card show.

However, because as it was held on a Sunday, I had to also fit in church AND hitting practice at 3. A tall order, as my church is pretty far away and we had to go the 11 O'clock mass. Not to mention eat lunch.

Somehow or other, I did it. Everything kind of blurs when you go through a card show in 25 minutes. One thing it did was make my appreciate how nice it is just to be at a card show without being stressed and hurried.

The cards I got weren't too much worse than if I had been able to take my time, though not as much as you might expect. But I can tell you it's a lot funner to be able to take your time and see the sights at a card show.

But, as I said, I got some pretty good cards. 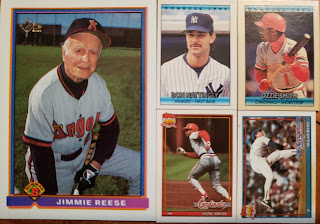 Though there was just 1 seller with a dime box, and he didn't have many cards, the cards there were certainly packed a punch. Really, there were just about the right number of good cards for my budget.
These were my 1st Cracker Jack cards, placed next to a regular card for comparison. 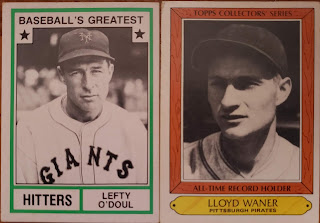 Lefty O'Doul had a pretty cool career, as he started out as a pitcher in the Pacific Coast League, and was pretty successful for a little, winning 25 games with a 2.39 ERA in 1922. He spent parts of 4 years in the major leagues, 3 with the Yankees, before converting to the outfield after a 6.54 ERA in 1924 in the PCL. It was the right choice, as he went on to win 2 NL batting titles, though he never won a PCL batting title, which is a little ironic. 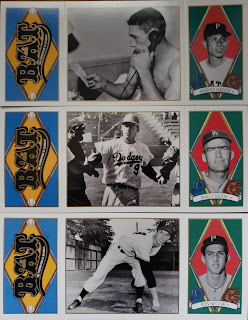 I'd never seen any of this set before (it was made by Upper Deck in 1993), but any sets that have guys like Ron Neccai, who struck out 27 batters in a 9-inning minor league game, are welcome. 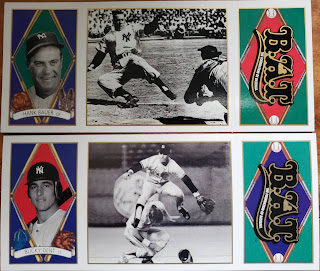 The photography is really nice on these cards. If I had a bit more time to think, I would probably would have gotten a couple more, but it's all right I guess. 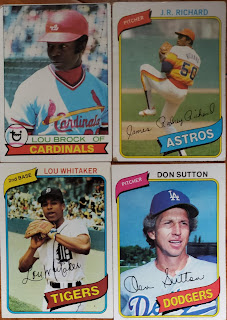 In my opinion, any dime box that gives me vintage hall of famers is a good dime box. And I was also very happy to get the '79 J.R Richard, as I'm a J.R fan. 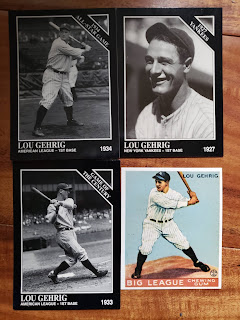 It's nice getting 3 more Conlon cards into my long-term quest to complete the Conlon collection series, let alone them being Lou Gherig. The 1933 Goudey reprint was done by the Renata Gallasso company, which I think is pretty cool. 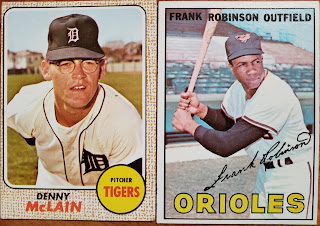 While I was digging through the dime box, my Dad looked throughout the card show to see if they're was anything I might be interested in. I think he did a pretty good job, as he found a dollar box which held the 2 cards above. I think getting a vintage hall-of-famer for a dollar is pretty good, especially as it's in beautiful condition outside of some non-intrusive pen marking on the back. 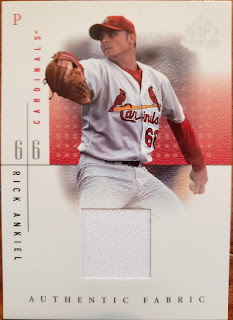 I generally prefer getting vintage than memorabilia or autograph cards, but I wasn't going to pass up this Rick Ankiel card. 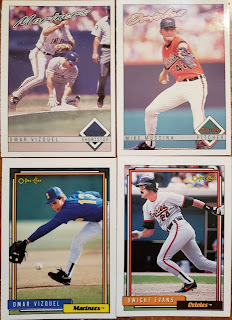 One nice thing about this card show is that for $1 paid admission, you get a grab bag with cards. They're generally pretty hit and miss, but it's still fun getting them. But this time, one of them was practically filled with O-Pee-Chee cards! I always enjoy OPC cards, as they're rarer than regular Topps cards and also are bilingual, which is always interesting.

I got  a lot of new OPC cards from that bag, most of them from about 1990. I got a near complete 1993 World Champions set, featuring the 1992 World champion Blue Jays. I'm missing only the 3 hall-of-famers in the set, so if you have any of the missing cards I might be interested in trading.

Before I went, I also looked through the free bin of stuff, which is always at this particular show. I would have loved to look through it more, but time waits for no man so I had to rush. I still found some cool things, like this sheet of Panini stickers featuring 2 yankees. 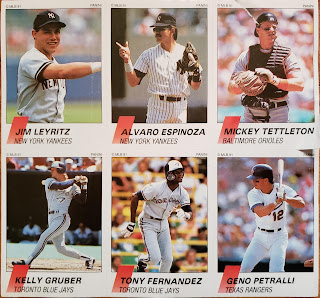 I also found this: 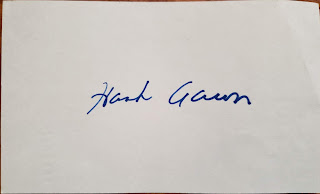 I know it's chance of being authentic is about the same as my chance of being elected president in the next 10 years (I'm 13), but it's still kind of fun to think that they're might be a tiny chance of it being real. I looked a little at some of his autographs, but I wasn't certain so I'd be interested in hearing your opinion on it.