Every now and then I read about incredible "finds", like somebody discovering a Babe Ruth rookie card in a piano or rare Ty Cobb cards in a paper sack.

This is not quite on the same level, but as it happened to me pretty recently, it doesn't just make me think " I want that to happen to me but its never gonna".  They were already my cards anyway, but it was still a triumph.

Anyway, on with the story:

About a month ago my sister was dusting behind our stereo when she found a small stack of cards, and gave them to me, because whenever you find cards lying around, t's pretty obvious they're mine.

As I thumbed through them, they're wasn't much to get excited about. Mostly, they were Upper Deck Looney Tunes baseball cards, with some other junk wax cards mixed in.

But then I noticed... 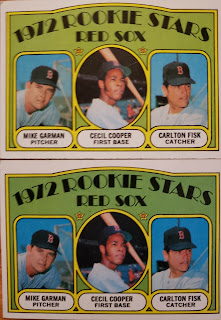 There is, by the way, a back story for me having 3 Carlton Fisk rookie cards ( counting the one I already knew I had). Long ago, when my knowledge of the hobby was not as great, as I was thrilled to discover in my 1997 Beckett price guide that Fisk's 1972 Topps rookie card was listed at a stupendous $60!

Of course, that was way back in 1997, but whenever I found that card in my Dad's duplicates, I would trade for it, thus stockpiling a few. However, going forward to 2020, as I didn't know where the others had gone, as I just had 1, I just assumed that I'd traded them back to my Dad.

Anyway, as I already had one I decided to trade them to my Dad for some of his duplicates. I started out with a Mike Schmidt rookie card, as I'd had my eye on that card for awhile because my Dad had 4 (!) copies of it. 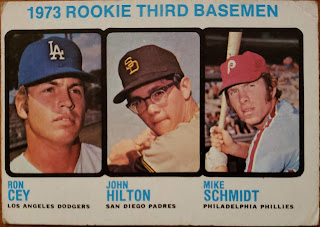 Not in great condition, but still a great card. I also got my Dad to throw in 3 commons from 1973 with good photos. 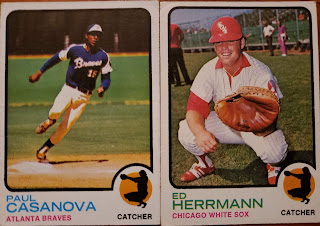 I especially like the guy in the purple suit in the background of Herrmann's card. 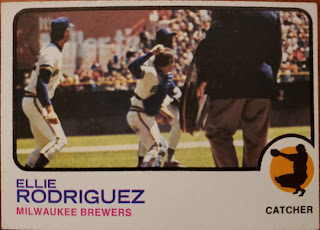 Overall, a pretty good haul for the 1st card. But there was still one more to trade.. 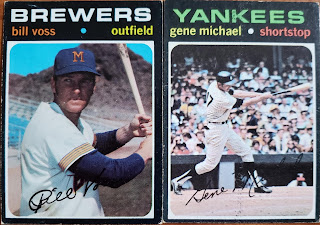 I ended up deciding on an assortment of 70's stars and semi-stars, of which I'll show a sampling. I like the mountain in the background of Bill Voss' card, something I've noticed on a lot of Brewers cards around then. 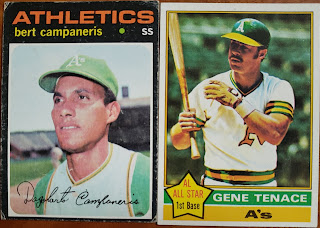 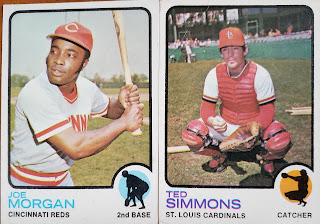 1972 was Joe Morgan's 1st year with the Reds, and he went on to win 2 MVP awards for the Big Red Machine in the 70's. Also, I always love it when there are bats strewn about the ground on a card, like in Ted Simmons' card. 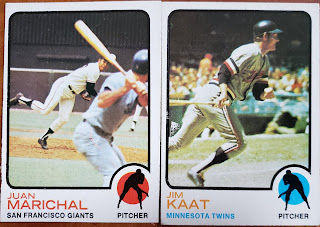 Although I'm not a huge fan of the design for 1973 Topps, it has some pretty great photography.  Jim Kaat was actually a pretty good hitting pitcher, as he hit .185 with 16 home runs over his long career. His best season at the bat was actually 1972, as he hit .289 with 2 home runs in 45 at-bats. 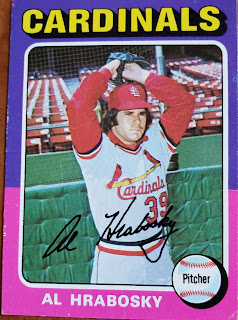