Sometimes you're just in the right place at the right time. One day I was browsing on Comc, as I do too often, when I noticed that a couple tobacco baseball cards were heavily discounted. This was perfect, as I love getting any baseball cards made before World War 2, and these were the cheapest I'd ever seen, outside of some really beat-up T205 commons. And they weren't just mere commons. The one I was itching to get the most was a T206 Fred Merkle, known for his "boner".

The only problem was money. I technically had enough, but that was earmarked for a card show that was coming the next weekend (yes, this was a while ago). I was very anxious about it, when finally I remembered something.

My Uncle Charlie, a little after Christmas, had asked if there was something he could get me for a late Christmas present. Being me, I had kept on putting it off, which turned out well. I had originally planned on asking for just  a baseball book or two, so it turned out to be very providential that I put it off.

Late that night, with my mind still going way past it's normal rate, I had bought the Fred Merkle, which my Uncle got for me, and another card. 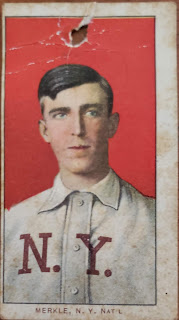 Beautiful, isn't it? Though Merkle is just remembered for the error which lost the 1908 pennant race, he was actually a pretty good player, finishing 7th in the MVP voting in 1911, and 18th in 1912. He hit .273 for his career, pretty good for the dead ball era, and after he was done in the major leagues starred in the high minor league for a couple years. 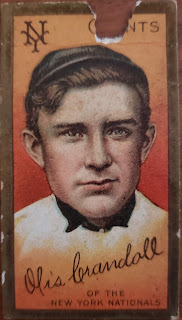 And now for the other card. This was my first T205, and I was not disappointed. I think the set would be as popular as T206 if it wasn't missing the attention-catching errors and scarcities that T206 has in relative abundance.  I chose Doc Crandall for my 1st example as he had a very interesting career. He was one of the 1st relief aces, for one, leading the NL in games finished every year from 1909-1913. He was also a very good hitter, and in fact in 1914, while playing in the Federal League, he was used as both a pitcher and a 2nd baseman. It worked pretty well, as he went 13-9 on the mound and hit .306.

Also, he won 354 professional games, most of them in the majors and the Pacific Coast League, the best minor league at that time. 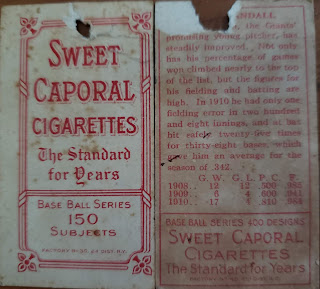 And here are the backs, from when they knew how to make good backs.  T206 had simple but attractive backs, and T205 was one of the very first sets to have statistics on the back.They were both Sweet Caporal cards, which is interesting.

Thanks for reading, and also thanks to Uncle Charlie, who made these cards possible.