So, for a long time I'd had this card of Mike Trout. I liked it because it was Mike Trout, and it was shiny. I had no idea where I'd gotten it; it was just in my cards with a couple other cards from that set. You can probably guess where I'm going with this.

I put it up for auction a few weeks ago, because with the boom in modern cards and the Mike Trout Superfractor selling for 4 million dollars, I decided it was the time to sell. It had some corner wear, the result of it just being in my collection for my years, but it still sold for $80.
So now I had all this money that I wasn't sure what to do with. I wanted to get a 1933 Goudey hall of famer, but it took a long time to decide on one. I ultimately decided to get a Waite Hoyt card, as it's a nice one. 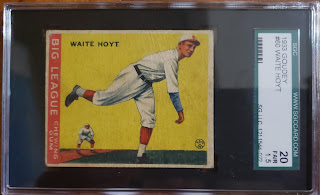 Overall, I was pleased with my purchase. It's in very good condition, except for a surface wrinkle on the front, and it's a very attractive picture. Waite Hoyt himself wasn't too bad, either. He won 237 games over his 21 year career, and won 22 games against just 7 losses with a 2.63 ERA for the 1927 Yankees.
I now have 12 out of the 239 cards in the set, with 2 out of the 64 hall of famers. I'm starting to get discouraged again about how many hall of famers there are in the set, so I'll probably switch my focus to 1959 Topps for now unless I find a really good deal.