I joined the forum Net54 earlier this year, because I thought it would be cool to learn more about pre-war cards, and get to see all the other members' great collections. And dream of when I'll have a collection close to some of theirs. That's worked pretty well, but I've also found you can get some good deals for buying too. One member holds weekly auctions of lots of 1950s and 1960s cards, and I made a couple of purchases from him.

One was an 8 card lot of 1955 Bowman, including three high numbers which I got for $19. Before buying this, I had just three 1955 Bowman cards, so it was definitely time to get some more. 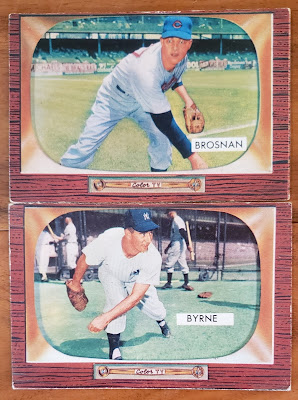 These are two cards I really bought the lot for. Jim Brosnan was one of the few real intellectuals in the history of baseball, writing The Long Season and Pennant Race, two acclaimed baseball books. He was duly nicknamed "The Professor." This card of him was my first of his, so it's not bad to start with his rookie card.
Tommy Byrne's card, like Brosnan's, is a high number. I already wrote about Byrne earlier this year, for my Christmas 1956 Topps post, so I won't repeat myself, but his control was historically bad. According to COMC, Mickey Mantle is in the background. I'll take their word for it. 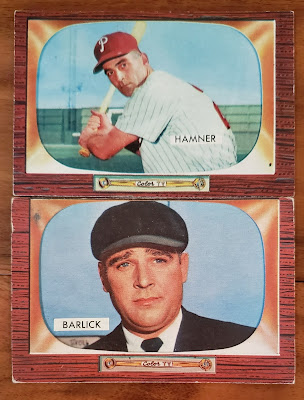 Who needs a card of an umpire? Especially expensive, high number umpire cards. Nothing against umpires, they're just not exactly thrilling. I might sell the Barlick so I can get cards of some real players. Update 7/7/21: I just sold the Barlick on Ebay for $11. So that's good I guess. 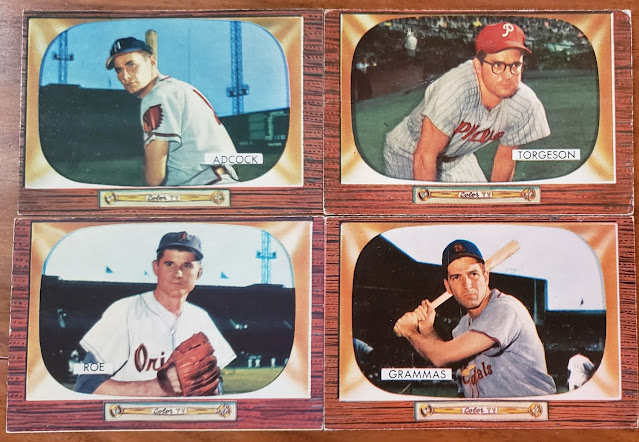 1955  Bowman is a nice set. The backs, especially the ones with the dull writeups like "My Favorite Memories in Baseball," are pretty bad, but the fronts are fun in a nostalgic, heavy-handed way.
It looks wrong to see Preacher Roe as an Oriole. Especially as he never even pitched for them.
I'm glad that I have a new option for buying cards in Net54, and I'm also glad I have more than three 1955 Bowman cards now.
Posted by GTT at 6:30 PM