I made a third order on Kronozio a while back, and it seems like I've exhausted the stores of the seller I've been using. The only vintage cards added by 'my seller' recently have been overpriced. It was good while it lasted. Anyhow, I got some very good cards in this last order, so here they are.
I made some progress on 1963 Topps, which is one of my favorites. Currently, I have 36 of the 576, and my dad has another 26, so altogether I have 11% of the set. 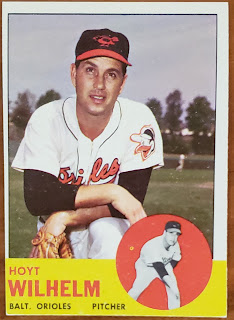 Hoyt! At $2.90, this was a little on the expensive side, but that's fine for a vintage HOF knuckler. By the time this card came out, Hoyt was pitching for the White Sox. Only once in his six years with the Sox did he have an ERA higher than 2.00. 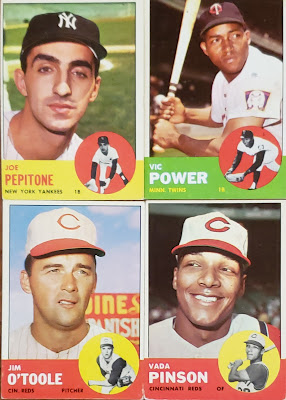 As many of y'all know, Joe Pepitone is currently suing the Hall of Fame over the ownership of Mickey Mantle's 500th homer bat, Pepitone claiming it was his bat and he had loaned it to Mantle. It'll be interesting to see how that's all resolved. Pepitone's 1963 Topps card is his first solo card. His rookie card costs $60, as he is one of four floating heads on a high number in 1962. 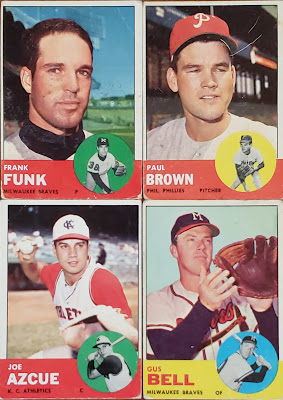 The dirt cheap high numbers return, with Bell being the only of this quartet who cost more than 80¢, at a whopping $2.
Frank Funk? 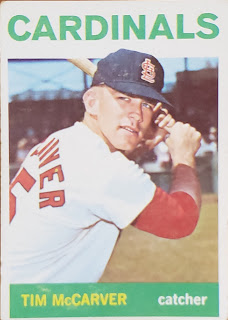 The second-most expensive card in my order, at $3.40. For some reason, you can't get this card for under $10 on either COMC or Sportlots. And $3.40 feels like overpaying a little. 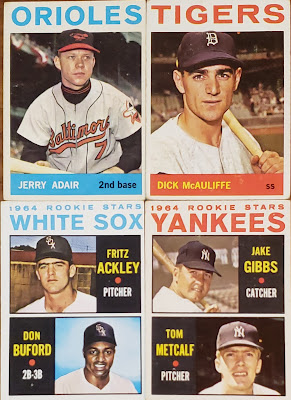 I'm thinking of using the Gibbs/Metcalf rookie for TTM, as both are still living. It would make for a pretty cool piece autographed by both.
Though Buford isn't widely remembered, he was a highly capable leadoff man for one of the greatest dynasties of all time, the Baltimore Orioles at the start of the 1970s. He scored exactly 99 runs a year each year from 1969 to 1971, but in 1972 he hit just .206, and went to Japan after the season. He played for the Taiheiyo Club Lions and Nankai Hawks from 1973 to 1976, earning Best Nine honors in his first two years. His best year was 1975, in which he put up a slash line of .330/.430/.487.
It would be nice to get his rookie card autographed, too. 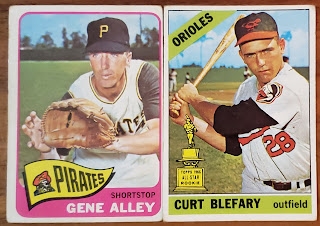 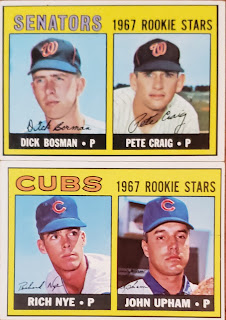 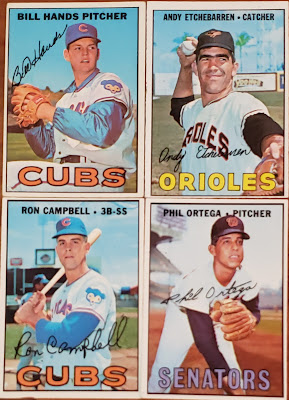 I was recently rating my favorite sets on TCDB, and 1967 Topps is one of my favorites, at 9 out of 10. I'd say it's my 8th favorite set of all-time.
Etchebarren has my favorite picture of the cards I got, with the unibrow and Yoohoo's sign in the background.
Ron Campbell's sunset card is another card that's overpriced on COMC, at $19.92. Sportlots doesn't have a copy at all. 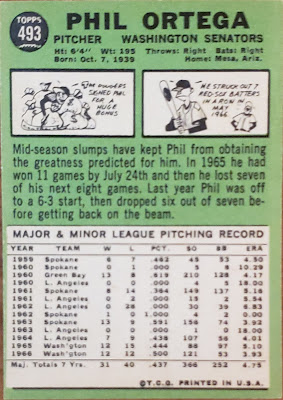 Despite what Topps would have you believe, Phil Ortega had an 0-2 record for L.A in 1962, not an 0-28 record.
And I'll close with two Yankees who had beautiful cards, even if their careers were not quite so beautiful. 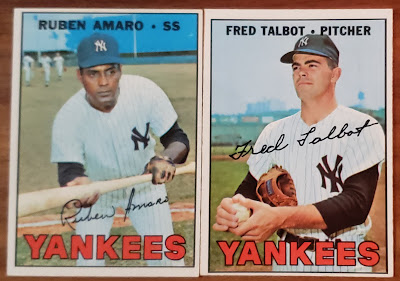 Ruben Amaro hit .234 with 8 home runs in his career. His son Ruben Amaro didn't do much better, at .235/16. Fred Talbot's career record was 38-56, with a 4.12 ERA. Not exactly the glory days of the Yankees.
Though I may have used up the inventory of my favorite seller, there are a couple of other sellers who have cards I'm interested in, so I might make another order sometime.
It's been a while since I've shared any songs, so I think I'll feature some tonight.
Ruby Falls by Guster is a great song, and I think this Line Rider track takes it to an even higher level. Line Rider is a game where you build a track for a rider to go over. Rabid Squirrel is one of the greats of Line Rider.
While I'm on the subject of Line Rider, I'll show maybe the greatest Line Rider track of all-time. Hope you enjoy these.

Mississippi John Hurt is one of my favorite bluesmen.
This is my 99th post, so my next post will be my 100th. I'm planning on posting a special card, so stay tuned.
Aaron Judge is batting for his second time as I write this. I hope he gets a hit. I was glad to see him score the first run of the game.