Today, 2000-odd years ago, Jesus Christ was born. Christmas also has the added attraction of being the big gift-giving holiday of the year. As this is a baseball card blog, I'll just say in passing that it is good to remember that it is, after all, a holiday celebrating the birth of Christ.

I got some great baseball cards this year, so thanks mom and dad! It took me forever to decide what I wanted, though. I was originally going to ask for some 1959 Topps hall of famers, but I realized all of a sudden that I was tired of 1959 Topps. That feeling passed off, but I am going to work on some other sets before I go back to working on it. Don't want to be too burned out on it. I eventually decided on 1956 Topps Yankees, because you can never go wrong with 1956 Topps. Because I decided so late, there are still a couple of stragglers in the mail. I got 6 today, and they're all great. 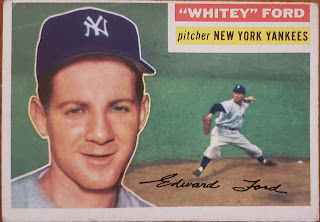 I always like getting Whitey's cards, as he was a great Yankee pitcher. I love how his career W-L on the back of the card is 61-22. Almost otherworldly. 1956 was one of Whitey's best years, as he posted a 19-6 record and led the league with a 2.47 ERA. 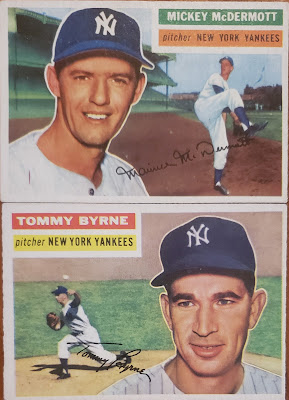 I was very glad to get the Mickey McDermott, as he didn't stop long in New York. 1956 was his only season in the pinstripes, which is probably just as well, as he had a 2-7 record with a 4.24 ERA. He did pinch hit 24 times, though he had a bit of an off-year at the plate, hitting .212.
Tommy Byrne was an interesting pitcher because, though fairly successful, he had terrible control. In 1949 he walked 179 batters in 196 innings, the next year he walked 160, and the next year he walked 150 batters in 143.2 innings. 1955 was his best year in the majors, as he led the league in winning percentage with a 16-5 record. That year he walked "just" 87 batters in 160 innings. For his career he walked 1037 batters in 1362 innings. I don't know if there's really a match for him in big league history. 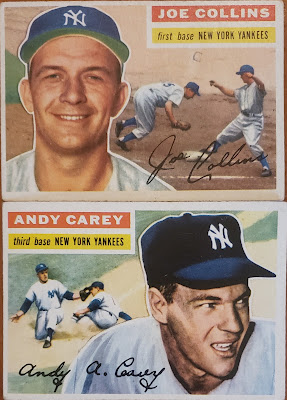 Andy Carey's card is the only one I got which I don't really like. Something about his face is just really weird. Joe Collins' card is nice, though. 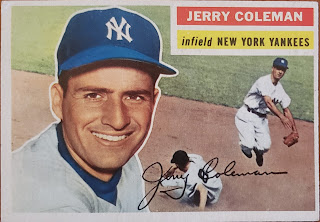 This might be my favorite of the bunch, just as a card. I'm not totally sure why I like it so much, but I just do.
As stocking stuffers I got 4 modern packs. It was nice to open some packs, because I never get packs on my own. I got one pack each of 2018 Topps, 2019 Topps, 2020 Topps, and 2020 Topps Update.
The pack of 2020 Topps Update was the best, surprisingly. I'd seen about 2020 Topps Update on the blogs, so I was warned of how boring the set was. The pack was boring, except for one card which made it all okay: a Randy Arozarena foil parallel rookie card! 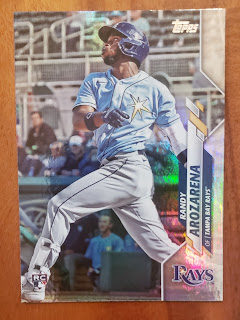 I've had some very good luck with getting good cards in Topps Update at Christmas. For 2018, my sister got me a 36 card pack of Update, which yielded a Ronald Acuna Jr. rookie card which I sold around 2 months ago. I'm planning on selling this card to get some vintage, as I believe this card is only going to go down in value. (I really hope I don't have to eat my words.)
The Arozarena was the one big card, but the other cards were enjoyable too. 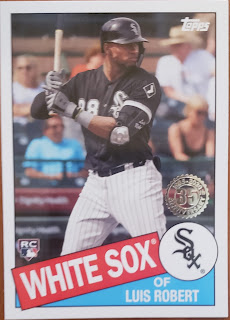 It was also nice pulling a Luis Robert. I'll keep this one, as I think that Luis Robert has better seasons in store. 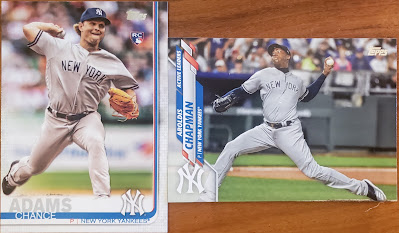 Getting a Chance Adams 2019 Topps card seems to have become a new Christmas tradition for me, as I got the pink Chrome parallel last Christmas. 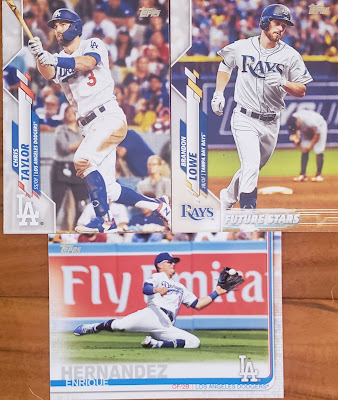 It was nice getting cards of some guys I got to see in the World Series this year. 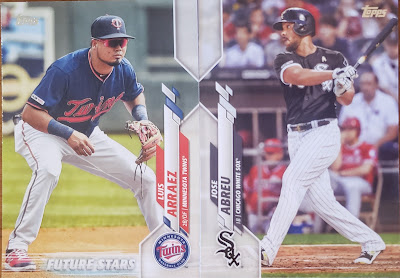 Luis Arraez's 2020 Topps card lists his weight at 155 pounds, but Baseball Reference lists him at 175 pounds. He's not a behemoth, whatever his weight is. Arraez currently has a career batting average of .331, so if he keeps that up he'll have a nice little career. 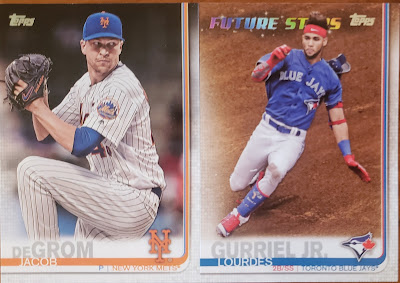 It will be interesting to see how deGrom will be viewed by hall of fame voters. On one hand, he won 2 straight Cy Young awards, and has a 2.61 career ERA. On the other hand, it will be a bit of a surprise if he ends up with more than 150 career wins. 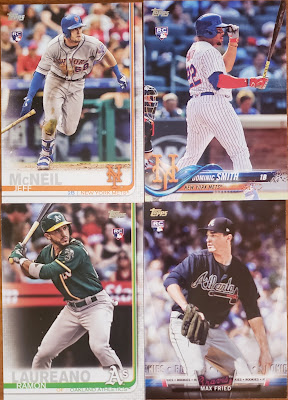 This was a nice little quartet of rookies. Jeff McNeil is a very good player, with a .319 career average and good fielding. Dominic Smith hit .316 with 10 home runs in 50 games this year, so we'll see if that improvement is real. Ramon Laureano has an incredible arm, and Max Fried has a 26-11 career win-loss. He had a 7-0 record this year, accompanied by a 2.25 ERA. 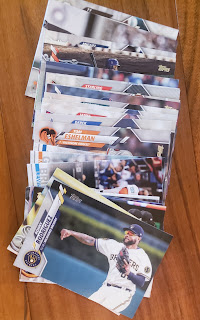 And here are all my non-keepers. If you're interested in some cards, I'm interesting in trading all of the cards above.
I also got an encyclopedia for the Mexican League, with stats up to 2000, which is very nice as Baseball Reference only has stats from 2001 to the present, not including some sporadic leagues they have.
Anyway, that was all I got for Christmas this year, not including some money I got from my sister, my aunt Stephanie, and my Grammie. Though I already spent a fair amount of the money my aunt Stephanie gave me on books.  And I think that my Grandma and Grandpa have a check coming in the mail too.

Overall, I've been having a very good Christmas, and I hope all of y'all have a very merry Christmas too!

Extra: I wrote in my post about getting my Comc shipment shipped that "My order is supposed to be shipped by March 10th next year. I'm praying that a miracle will happen, and I'll get my cards in a reasonable time. I know that almost certainly won't happen though."
Well, I got an email from Comc on Sunday that my cards were being shipped! I guess my prayers were answered, even though they were a little half-hearted because I thought it was so unlikely.They're supposed to come tomorrow, so I'm waiting eagerly. It looks like Comc might be catching up on shipping their cards, as there was a thread on TCDB about other people also getting their cards shipped early. I hope it is so.
I have a post I want to do over the weekend, so I'll get to the Comc cards a couple of days after I do that post.
I'm not a big fan of Christmas music in general, but Big Star's song "Jesus Christ" from their 3rd album is a very good Christmas song. Hope you like it too.
Posted by GTT at 4:13 PM