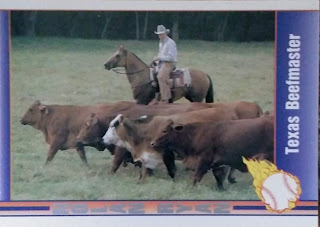 Last Saturday I had 2 baseball games. That is normally a good thing because I love playing baseball, however, it was a very cold day for Texas. I wouldn't have minded that as much, but we lost both games, and I went 0-4 and didn't pitch very well. I also made an error at 2nd.

With all those things, it would have been a pretty bleak day if I didn't have a card show to go to. It had actually been in doubt if the scheduling of my games would allow me to go, but the 1st game was at 8:00 AM so I had time. However, there was good news, and there was bad news. The bad news was that there wasn't a dime box. The good news was that there was a nickel box instead. It was very good too. A lot of them I would've been happy to get for a dime. 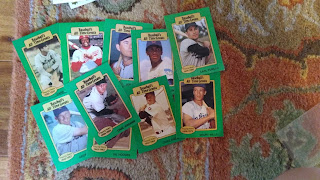 I got a lot of those "baseball's all-time greats" set. It's pretty good, and has a lot of players you don't always see, like Maury Wills and Carl Erskine. 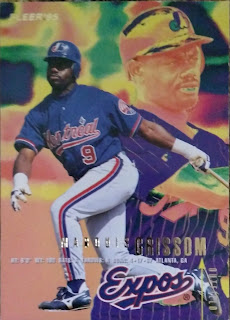 I got this 1995 Fleer card
just for kicks. The only one I had was previously was Jeff Bagwell, who was on one of the few teams that actually had a fairly conservative fronts. 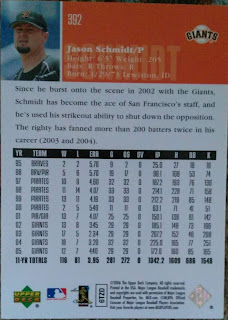 It's always gratifying when I get a card randomly that turns out to be an error card. Jason Schmidt actually had about 1,750 innings, not 1,342.2. I'm not really sure where they got that figure. 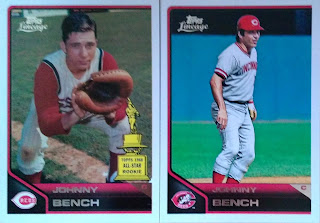 There was a decent amount of these Topps Lineage cards.They're actually pretty nice, though they'd be better if there was some stats on the back. 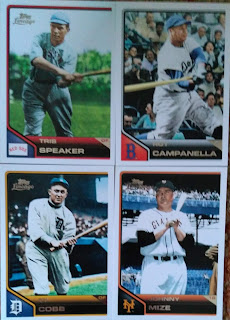 That Tris Speaker card was actually my 1st ever of him. It's kinda too bad when they colorize black-and-white photographs. 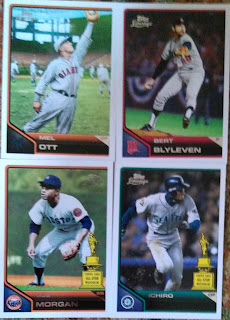 Ichiro was the only Topps Lineage  player I got who played after 1992. 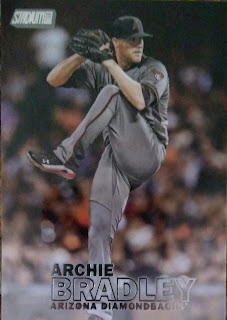 This was actually my 1st card of TSC from the 21st century. I've actually never seen one in person before that I can remember so it's kind of funny that I got my 1st for 5 cents. 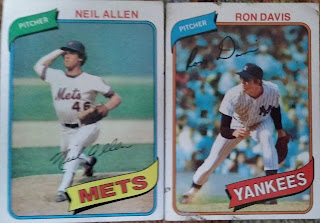 I count 1980 as the last "vintage" year, so it's always nice picking up cards from that year on the cheap. 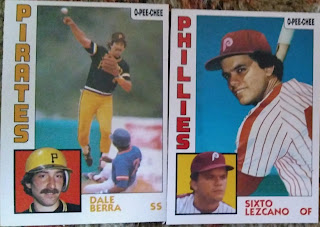 O-Pee-Chee!(I've always thought that Sixto Lezcano is the funniest name ever) 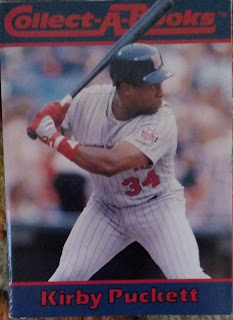 I'm sluggishly trying to complete this set, really just because I have a lot of players from it and it's rather cool. 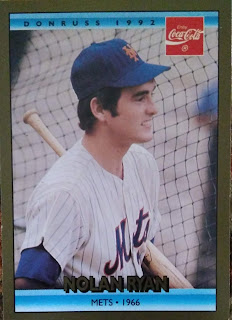 Nolan Ryan looks SO young in that picture! It's always weird seeing him as a Met, but this just doesn't look the 40-year old pitcher I'm accustomed to seeing! 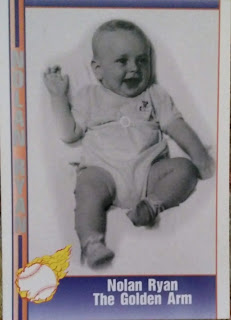 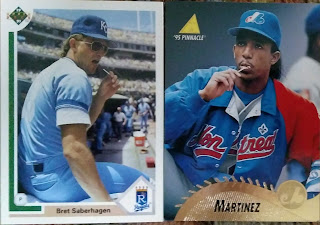 Oddly enough, on Saturday I got 2 cards of a player sucking on an lollipop without realizing it until afterwards! Note: Who has a lollipop while stretching? 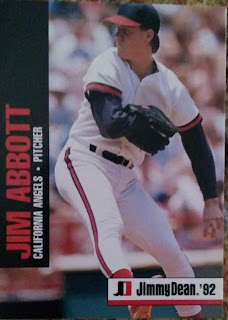 And now for the odd-ball parade to begin! 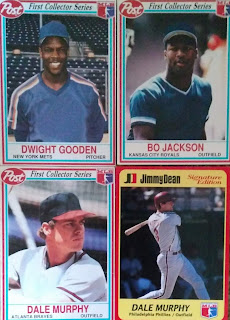 You can't tell, but the Murphy on the bottom left has a crease. 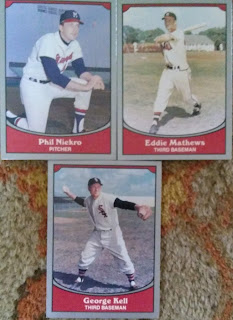 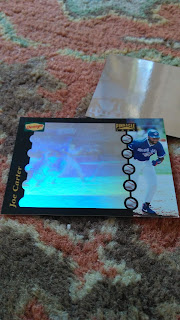 This Denny's Joe Carter card is really cool. It is pictured next to the Kent  Hrbeck that I got, which turned into a mirror every time I tried to take a picture of it. The Joe Carter was kind of tricky too. 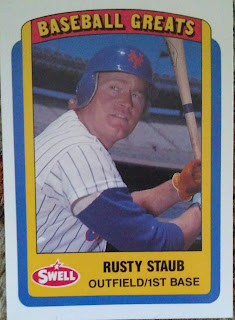 I really love the Swell baseball cards.They always look pretty cool, and generally show players I like, like "Le Grand Orange", who had one of the strangest nicknames ever. 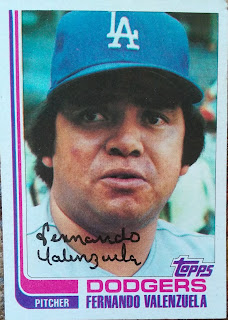 Fernando Valenzuela looks like he's bemoaning the fact that this card sold for a mere 5 cents. 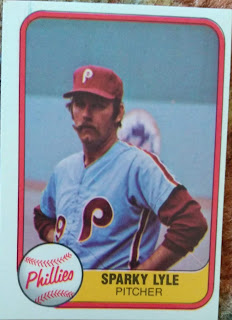 I thought this Sparky Lyle card was a cool card from later in his career. 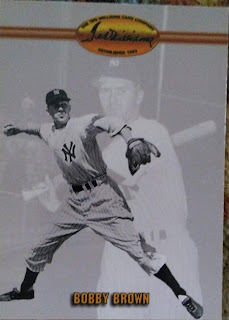 I'm trying, in my casual way, to complete the 1993 Ted Williams company set.It has a lot of nice players, like Bobby Brown, and a pretty decent design. 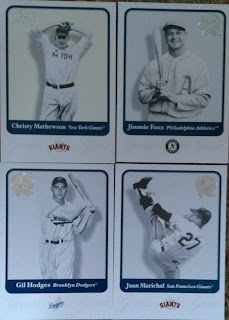 I really love this set because it has a really nice, clean design, and a lot of older players. That Marichal is one sweet card. Sometimes I have a little fun imitating  Juan Marichal's leg kick. 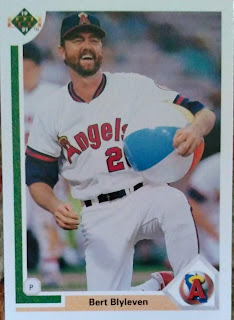 Seriously, how many times do you see a beach ball on a baseball card? 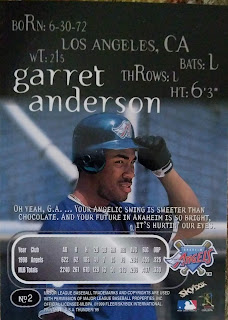 Just horrible... Who would think that set with rap-based text like that would ever end up anywhere else than a nickel box? 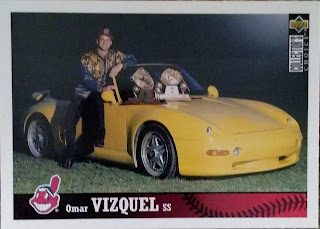 This a really, really cool card. 1)Omar Vizquel is wearing a perfectly horrendeous shirt. 2) He's right by a car, and 3) He has his Gold Gloves on the front of the car. I've shown a ton of nice cards, but there are still 228 cards I haven't shown from the nickle box. And they were all Conlon collection.
As I went up to  the dealer, I  was a little nervous because I thought I had over extended myself ( I had 360 cards). What he told me to do was to count the non-conlon cards, which came up to 119 cards,or $5. So he let me have them all for $5, or about 1.5 cents a card, which was really nice. So I had some money to spend and so I headed over to the table of the person who runs  the show,who is actually Rich Klein, the COMC guy. He generally has some good priced vintage, and a got a couple cards for $5 combined, including this Johnny Pesky, which was originally priced at $6. 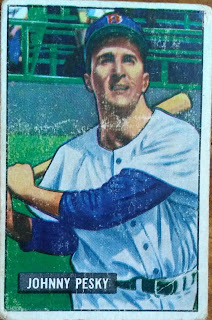 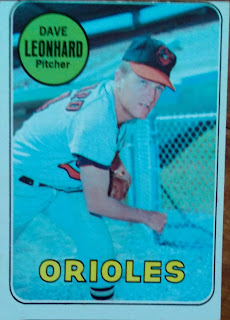 The other card was this one. I really like 1969 Topps and so this was a nice pickup. I ended up coming home with 362 cards and a couple dollars still left.
Thanks for reading!