I believe that in my last post I mentioned that three of my '56 Topps cards were still in the mail. Well, the last card came on Saturday, so now all 9 are accounted for. I love 1956 Topps, so I'm very happy to have gotten Yankees for Christmas. Anyway, here they are: 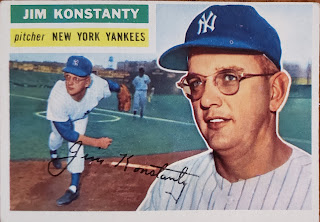 Though Konstanty, the 1950 NL MVP, was at the tail-end of his career by the time he joined the Yankees, he did quite well in his stint. From 1954-56, he was 8-3 with a 2.36 ERA and 17 saves in 62 games. He never pitched in the postseason for the Yanks, though, which makes it seem like Stengel didn't have an overabundance of faith in him. After all, he was 38 in 1955, the only year the Yankees were in the World Series when he was with them. 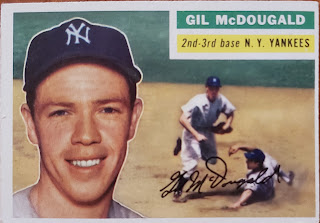 I have the feeling that Gil McDougald was Casey's kind of player. Not a star, but an incredibly useful player. He played all around the infield, and, what's more, was an outstanding fielder at every position. He was also a very solid batter, hitting .276 with a little power. You need the Mickey Mantles of baseball to win championships, but you also need the Gil McDougalds too. They act as the glue holding the team together. 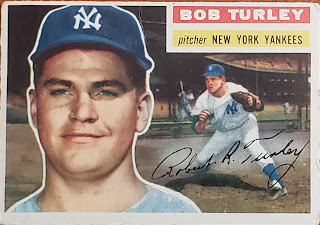 Bob Turley was the last to arrive, which is understandable, as the card was coming from Canada. 1956 may have been ol' Bullet Bob's worst season in the big leagues. Despite an 8-4 record, his ERA was 5.05, and he walked 103 batters in 132 innings. Though his control at the best of times was hardly pin-point, he compiled a 101-85 MLB record over 12 years, and won the 1958 AL Cy Young award.
I had a very good Christmas, and I hope Christmas 2021 will be just as good.
A couple final quick notes: My Comc order arrived last Monday, and my first post chronicling it should come in a couple of days.
I listed on Ebay the Randy Arozarena foil rookie card I pulled on Christmas, so if anyone's interested, here's its link:https://www.ebay.com/itm/2020-Topps-Update-Series-Randy-Arozarena-Rainbow-Foil-Parallel-Rays-U-208/274639007023
Also, I've been a member of the Trading Card Database for just a little over 2 years now, as I joined January 3rd, 2019. I'm glad to be a member, as it's very handy to track your collection on, and the members are all nice and helpful. I haven't traded on the site yet; that may be in the future. If you aren't a member, you should consider it. It's free, and it's very helpful just as a database even if you don't enter your collection or trade.