My Comc shipment came December 28th, so that was a pleasant surprise. I had anticipated waiting for months, which was not a pleasant thought. But a mini-miracle happened, so yay!

I had been buying cards from March onward, finally shipping them after Black Friday, so I ended up with a decent pile of cards. They were all vintage, as I love vintage cards. Which you can probably tell from reading my blog.

Since I got 80 cards, and want to show them all, I've decided that I'll break them up over 3 posts in total. This one will feature all the odd-balls, of which I got plenty. 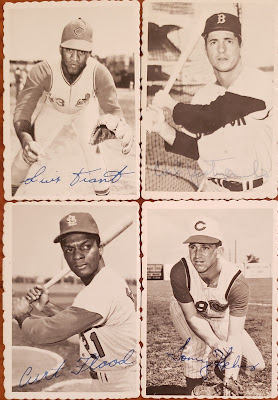 With these four I'm now down to just Rusty Staub and Willie Mays to complete the 1969 Deckle Edge set. It's a very nice set, and quite cheap. Except for Rusty Staub, who for some reason is $3, which is more almost twice as much as I payed for Yaz. So if anyone has either Staub or Mays, I'm eager to trade for them. 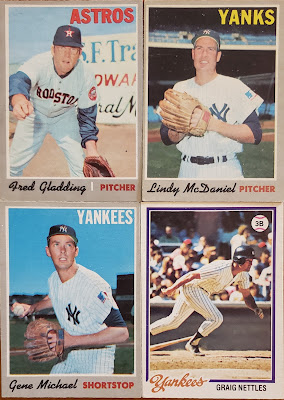 To be honest, I was not very enthusiastic about receiving this quartet of OPC cards. My order of O-Pee-Chee cards off Sportlots had satisfied my O-Pee-Chee urge for a good long time, so these cards, acquired long before my Sportlots order, left me cold. I guess it's inevitable that when you get cards you bought a long time ago, some of them you don't care about anymore. 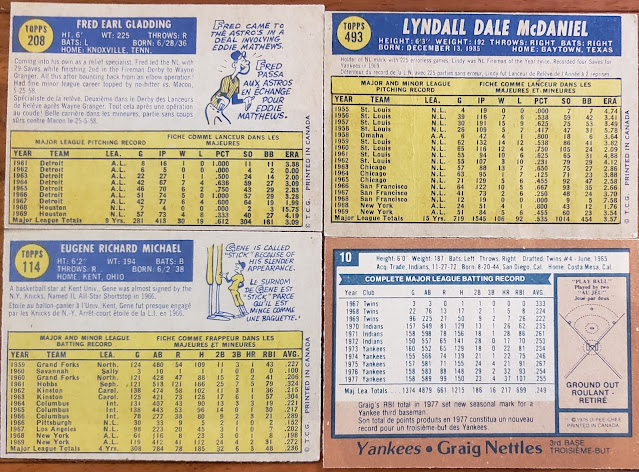 The backs are really the reason you get vintage OPC cards, so I thought I might as well show them. 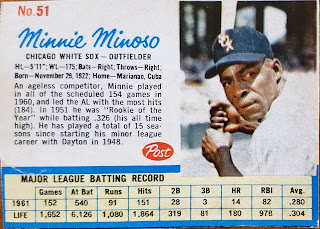 I was very excited to get my first playing career Minnie Minoso for just 65 cents! It's a nice card too. 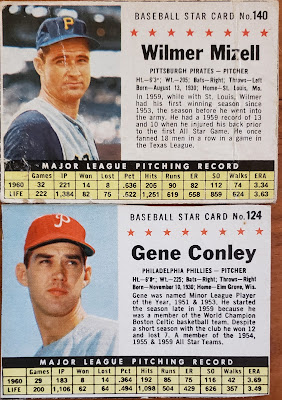 Wilmer Mizell is probably the only card that I really regret getting. It's not in very good shape, and it's not from a set I care too much about. But his nickname was "Vinegar Bend", so I guess it could be worse.
But I don't regret for a second getting that Gene Conley. A fun fact about him, which you might know: He is the only player ever to play for three different Boston pro teams: The Braves, the Red Sox, and the Celtics. He won one championship for the Braves, and three with the Celtics. 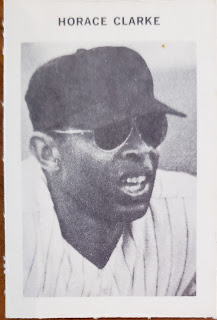 I really couldn't resist this 1969 Milton Bradley Horace Clarke. Horace is an important figure in Yankee history, as he has a whole era named after him, but it's his awesome specs that sealed the deal. He often wore glasses in other cards, but I don't know of any others that feature him with sunglasses, which is too bad. 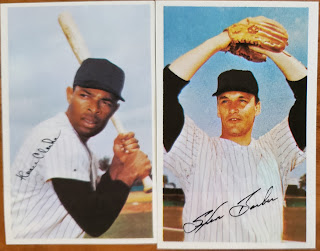 Actually, the Steve Barber on the right is another one I regret getting. I got it because I thought it featured him as a Yankee, but the TCDB lists him as being a Pilot. So whatever. 47 cents down the drain. 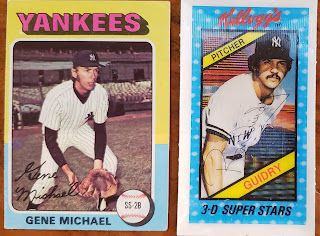 Guidry would probably be a hall of famer if his career was just a couple of years longer. His record, 170-91, is sensational, but 170 wins is too low to get considered. If his career started a little earlier, if his first year as a regular was at 23 instead of 26, I think he would be a no-doubt hall of famer. As it is, he has an okay case.
So that's it for the "odd-balls." My next post will probably be about the 1959 Topps cards I got. Thanks for reading, and have a good day. (or night if you read it tonight.)
Posted by GTT at 6:58 PM