The rest of my COMC shipment: Pre-war cards, Yankees, and the rest

This is the last, but not least, post showing the cards I got in my Comc shipment. I'm kind of glad I'm finishing them up today, because it's almost a month since I got them. I'm really working this month on taking care of my backlog, because it's better to blog about cards when the excitement of acquisition is still fresh. I hope to have it all worked off by some time in February. 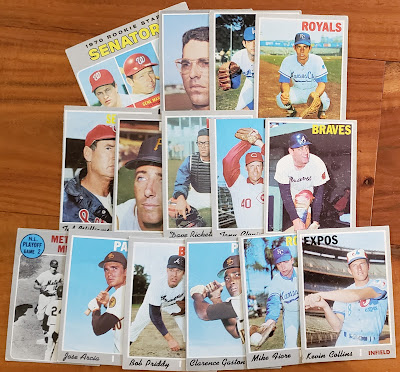 These are cards I got on behalf of my dad, who's trying to complete 1970 Topps, as that was the first year he collected cards. He mostly has just semi-high numbers and high numbers left, and after 50 years of collecting it he has just 28 cards left. 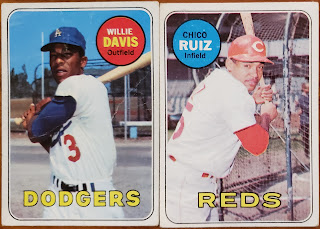 These are two that I bought when I thought I was going to collect 1969 Topps. And then I realized how many bad photographs there were in that set, so that went on the shelf. These two are all right though. 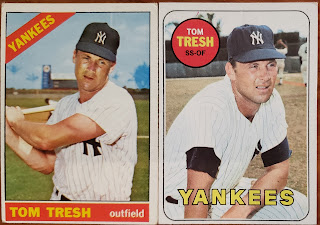 With these three, I now have all of Mel Stottlemyre's regular Topps cards from 1967-1974 (my dad having his '75 card). Stottlemyre was one of the few bright spots on the Yankees during their second Dark Age (the Horace Clarke Years), winning 20 games three times for teams primarily populated with such immortals as Jake Gibbs, Andy Kosco, Bobby Cox, Gene Michael, and others. 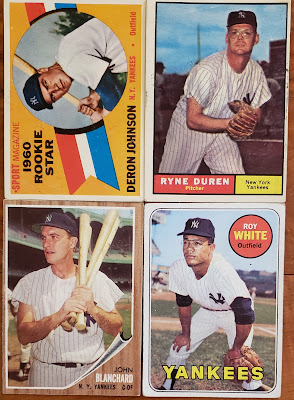 I like getting Ryne Duren cards, as I've acquired a love of the bespectacled fireballer from my dad, who in turn grew up on stories of Duren from his dad, my grandpa, who was actually around to watch him pitch.
Ryne Duren would warm up by unleashing heaters into the backstop, thus striking fear into the hearts of the prospective batters both by his speed and the knowledge that Duren didn't know where the ball was going. It's safe to say that not many batters dug in against Duren. One time in high school my Dad decided he'd try doing that in his warm-ups. It did not go as well. Midway through his warm-ups his coach came out, wanting to know what in the world was wrong. My dad explained that he was just imitating Ryne Duren, but he was a bit unnerved by his coach coming out in the middle of his warm-ups,  and ended up pitching badly. 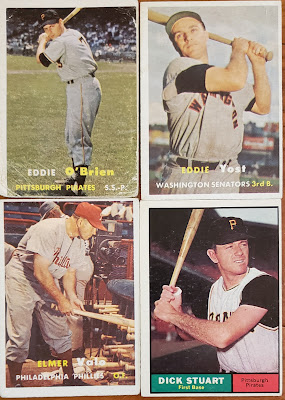 I love this quartet of cards. The ss-p designation on Eddie O'Brien's card is great.  Eddie Yost was called "The Walking Man" because he walked so much, leading the league 6 times in his career. Elmer Valo's 1957 Topps card is a classic, and so are Dick Stuart's nicknames. Four of his five nickname listed on Baseball Reference are classics: Dr. Strangeglove, the Boston Strangler, Stonefingers, and The Man with the Iron Glove. 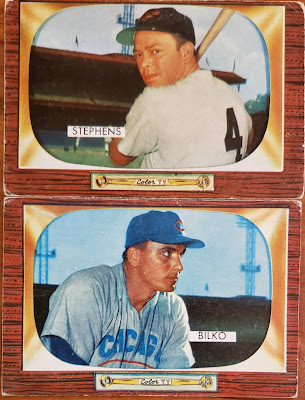 Steve Bilko was one of the greatest minor league sluggers in history. In a three year stretch running from 1955 to 1957, in which he played for the L.A. Angels in the PCL, he hit 148 homers with a .330 average and .638 SLG. But he never had much success in the majors. He hit 76 homers in 1738 at bats for 6 teams over 10 years, but never really caught on.
As it says in The Great American Baseball Card Flipping, Trading, and Bubble Gum Book, "If Rochester was New York City, Steve Bilko would be in the Hall of Fame. But it isn't. And he isn't." 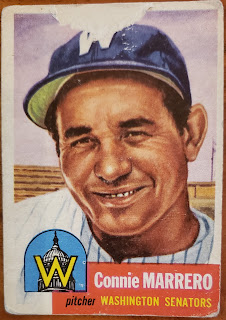 I was excited to add a card of Connie Marrero to my collection, as he was a very cool player. He spent his prime pitching for small town teams, and was in his mid-30s when he entered professional baseball, and 39 when he reached the major leagues. Despite those handicaps, he spent five very solid years in the majors for the Senators, going 39-40 with a 3.67 ERA with bad teams. 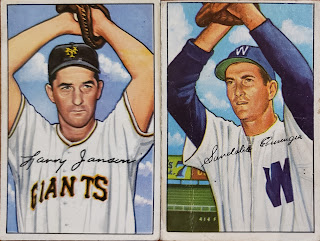 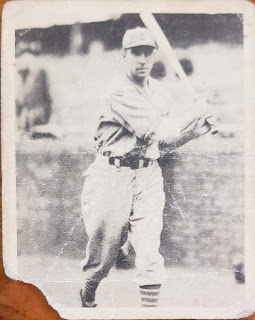 This was my first 1939 Play Ball card. It's in bad shape, but I was very glad to get it because it was just $3, and Johnny Cooney (the player, though you can't tell from the front) had a very interesting career. He started out as a pitcher, and was fairly successful, going 34-44 with a 3.72 ERA for pathetic teams. Switching to the outfield, he prolonged his major league by 10 years. Though he was a solid hitter, with a .286 career batting average, he hit but 2 homers over his 20-year career. 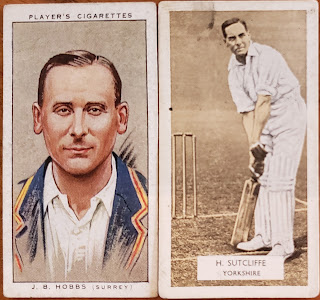 On a whim I bought two cricket cards, and I don't regret it at all. J.B Hobbs, maybe the greatest cricket player ever, was just 85 cents (!), and H. Sutcliffe, a teammate of his in international cricket, was a mere 75 cents. So if you want to get some pre-war cards, but want sports cards, not cards of birds and trains and flowers and planes, cricket is the best option.
I try to avoid spending much on individual cards, but every once in a while I splurge and buy a $10, $20, card, whatever it is. My big card of this order was a 1909 American Caramel card. It's of Harry Krause, who you probably haven't heard of, but had an interesting story. 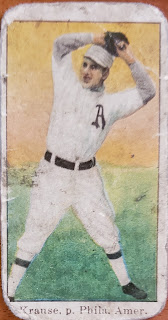 In 1909 Harry came out of nowhere to go 18-8 for the Athletics as a 20-year old, leading the league in ERA with a stingy 1.39 ERA. The next year though, he hurt his arm and dropped out of the major leagues, so thus far his career closely parallels Mark Fidrych's. But unlike Fidrych, he went back to the minor leagues and ending up winning 266 more professional games, finishing his 22-year pro career with 309 wins. 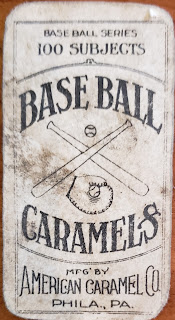 A solid back, though not as nice as the Polar Bears or Piedmonts from T206.

So that's it from my COMC shipment. I got a lot of cards which I really liked, and I hope y'all enjoyed seeing them. Thanks for reading!