Back when free card Fridays were still in vogue, gcrl had his own version, almost free stuff Friday, in which he would put up cards for claiming in return for one card off his want-list. The first time I saw it, I found the idea of wading through his massive want-list daunting, but the second time I was so impressed by the cards he had to offer that I took the plunge. I'm glad I did. In return for a 2006 Fleer Ultra Takashi Saito (and some cards for his lurker collection I threw in) I got to take my pick. I was the last to that particular almost free stuff Friday, but there were still some great cards left. 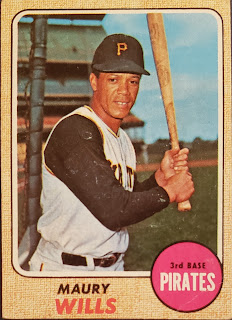 I ended up with five cards (including the Wills above), and they really packed a punch. 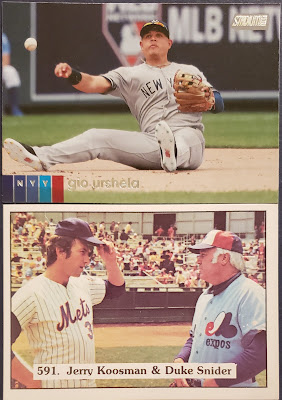 Gio is one of my favorite Yankees, because it's just incredible how he came out of nowhere. Before coming to the Yankees, he hit just .225 in the majors, surviving in the majors only because of his defense. Since moving to New York, he's hit .310 with 27 home runs. I doubt it's steroids, because I don't think steroids can turn a terrible hitter into a great hitter.
It's also cool seeing Duke Snider as a coach for the Expos. 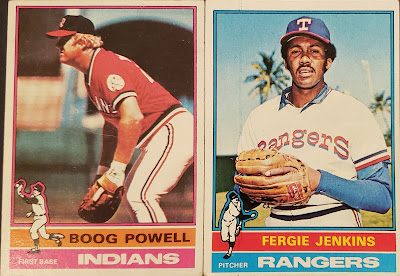 I think it's a tragedy how for vintage Topps, there are so many sets with great fronts and bad backs, and vice versa. 1971, for example. The design and the photography on the front makes the front a top-10 Topps set for me. But the backs are horrible; an ugly color and only one year of stats. 1970 has the reverse problem. The backs are nice, bright, and very readable, while the front is gray and bland. But 1976 may be the best example of that. The fronts are colorful, and the photography is good. But the backs may be the worst in the history of Topps. They can be almost impossible to read at times. The font and the background is almost the same color, making it a train wreck of a back.
Thanks for the cards, gcrl!
Extra: I'm going to a card show today for the first time in almost a year! And the last time I went, I only got to spend half an hour. It's going to be the biggest card show I've ever been to, with about 450 tables. All the card shows I've been to before have been small hotel shows, so I'm a little nervous, but hopefully it'll be fun and I'll get some great cards for me and my dad.
Posted by GTT at 8:57 AM