The Yankees are still alive ( and well)!

Right now the Yankees are currently in the lead in the AL East, which is what you probably expected for this year, even if you didn't like the fact. However, the Yankees are probably a very different team from what you imagined. They currently have 15 players on the DL (Ok, it's the "IL", but whatever). And it's not like the injured Yankees are dispensable players. Aaron Judge isn't expected back until June. Miguel Andujar will probably not play again this year. Didi Greogorius probably will not return until the middle of June. Giancarlo Stanton has no date for return. They also have such players as Dellin Betances, James Paxton, C.C Sabathia, Luis Severino, and Troy Tulowitzki. So how have they done it?

They've been helped by playing 12 games against the Orioles, which helps, but still doesn't explain the Yankees 34-18 record. The fact is that the Yankees just have a very deep lineup. D.J LeMahieu, who the Yankees signed as a free agent to replace Didi, has hit .317 so far this year. Gio Urshela, who was purchased form the Blue Jays in 2018, had never hit above .233 before this year, but is currently hitting .336! They have also gotten help from call-ups from the minors, like Thairo Estrada, a utility, who since being called up has hit .318 with 3 Homeruns. Clint Frazier has hit .275 with 9 Homeruns after missing a decent amount of 2018 from a concussion.Domingo German after 2 years of struggling is the Yankee's ace.

Somewhere I have an article from 2017 or 2018 talking about how the  Yankees are aren't as much of an Evil Empire now. It had an example of a guy who was actually finding it hard to root against the Yankees ( except when they were playing his team). I'm not sure how y'all agree with that though. I bet  what Y'all probably are thinking is "Man! the Yankees have all these injuries and are still winning?! Ugh." 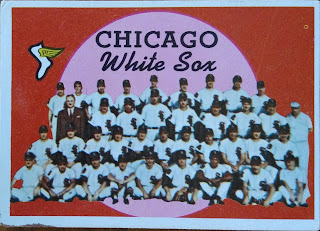 On Monday, I was on the way home when I noticed a card shop. I saw it just in time to ask my Mom if we could stop by. She said yes, and so we went in. At first it wasn't a very encouraging sight. There was a wall with a lot of boxes that said " 25 cents for commons, 50 cents for Chrome". "Commons" referred to base cards, not average players, which was good, but it still wasn't very interesting. I picked one card from 1993 Ted Williams, just because I thought I'd at least get one card. I was nearing the cash register when I noticed a box of vintage. It was mostly fairly priced, but  not really what I wanted to pay. At least until I started noticing some quite affordable low grade stuff. The card on the top of the page was just 40 cents! Granted, the back wasn't very good, but that's still a great deal in my book. I ended up getting 6 1959 Topps cards, and 12 various 70's cards. 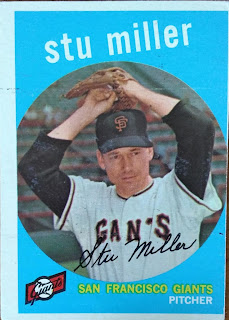 This was the most expensive card I got at 80 cents. In 1961 Stu was blown off the mound at Candlestick Park in the All-Star Game, which was reason enough for getting this card. 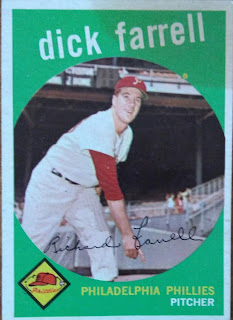 Really, I just love getting low grade vintage. I mean, for example, a better centered copy of the Stu Miller card above was available for $3.20, or 4 times what I paid for my copy. The better centered copy probably wasn't priced as well anyway, but you get the idea. It's a lot more budget friendly for a kid ( me) to get off conditioned cards. And the dark spot in the top right corner isn't a shadow. It's a stain, the reason why I got the this for 40 cents. 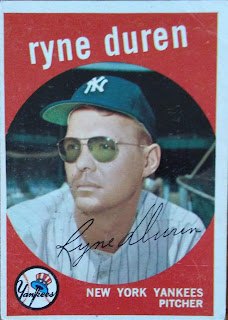 I thought that this was a pretty nice pickup for 60 cents.He was  a Yankee, and he was also what "
the sportscasters like to refer to as a fireballing right-hander, a real flamethrower, an aspareen chucker." ( points if you know what that was from). He also had some nice glasses. 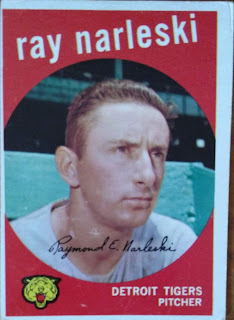 Narleski's card was also 60 cents, and he was also mentioned in the same book. "Narleski with his sly little-boy grin and the darting, fishy eyes of the small time criminal handles the customer relations," 1959 turned out to be his last year in the majors, as his ERA soared to the upper 5.00s. 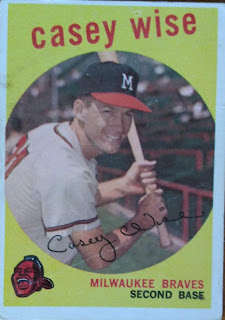 This very card was in fact featured in the book.
Most of y'all should probably know which book I'm talking by now. This card was also the 1st card I've gotten where the player had amassed 700 or more at bats in a minor league season. 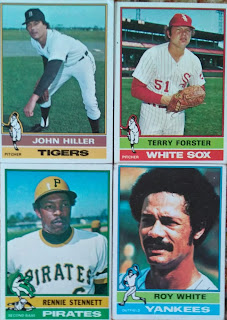 There were also some late 70's cards that were mostly about 10 cents. I'm a fan of 1976, and so I was glad to pick up these for such a price. The John Hiller was actually a quarter, but it was worth it. 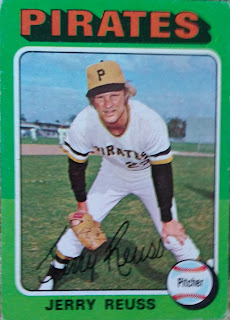 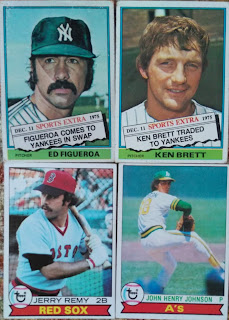 Overall, it was a nice haul. I'll probably be going back pretty soon, if my Mom allows it ( imagine your son having 10,000 baseball cards and not always putting them back after looking at them).
A quick note on posting: I often don't post because I haven't really got anything interesting. On the other hand, sometimes it's just negligence.
Thanks for reading, hope you enjoyed it.