After my first order from baseballcardstore.ca, or the online dime-box, I made frequent small purchases by taking advantage of combined shipping. 400 cards later, in December, I finally got my cards shipped, hoping it would arrive by Christmas. And then I waited, and waited, and waited .It turned out that they were low on card supplies for shipping, which is okay, but I wish they had said something. I finally got my cards the same day of the card show, in late January, and when I heard it was delivered I ran out to the mailbox. I was not disappointed. It took a while, but it was worth it. Digging through 400 cards was pure joy! 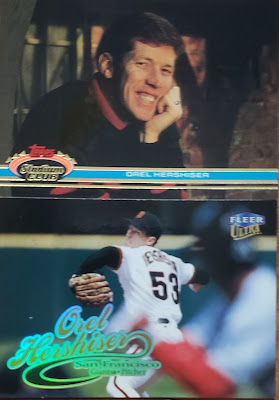 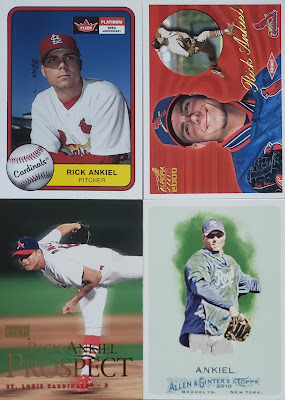 I compete in speech, and last year I did a speech on baseball players who overcame great odds, featuring Rick Ankiel, Jim Abbott, and Mordecai Brown. All three are favorites of mine. It was a fun speech, as I love being able to tie in baseball to speech topics whenever I can. 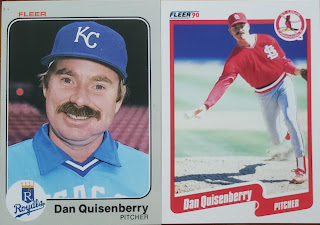 Dan Quisenberry has become my second favorite player ever, behind only Mariano Rivera, and that 1983 Fleer card is my favorite card of his. It sums up his warm, quirky personality perfectly. The 1990 Fleer card on the right, by the way, is not your everyday run of the mill 1990 Fleer card. It is a Fleer Canadian card.
I now have 25 cards of Quiz, or a little over 10% of all his cards. Just 205 to go! 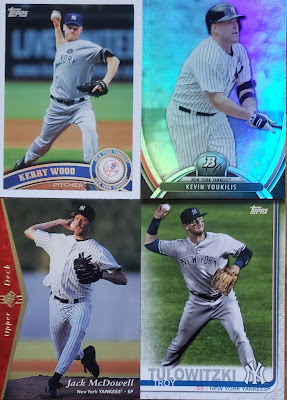 This order was very helpful in filling in holes in my "One card for every Yankee" quest. The Jack McDowell was especially satisfying, as I'd been looking for one for a while. 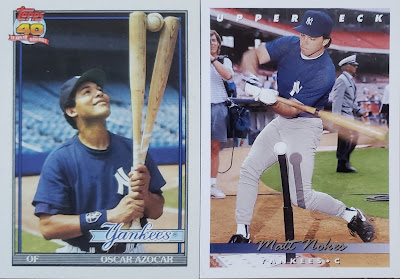 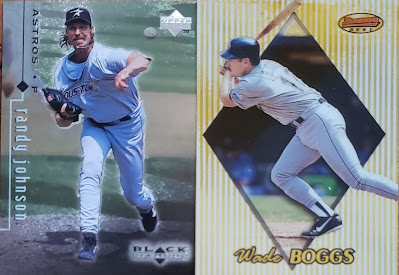 It's always cool getting cards of favorites in unfamiliar uniforms. 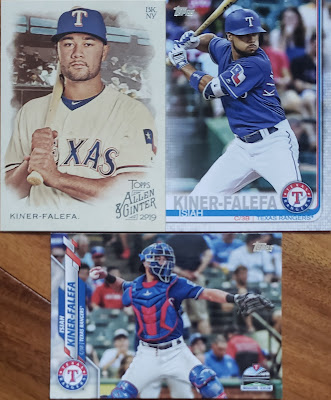 Isiah Kiner-Falefa might be second favorite current player, behind only Aaron Judge. He spent two years for the Frisco Rough Riders a while back, and two years playing for one team is forever in the minors nowadays. Gone are the days when Jigger Statz got 3,356 hits with one minor league team, the Los Angeles Angels. It seemed like every time I went to see the Rough Riders, Isiah would be playing. He was a constant, an oasis in an ever-changing roster. I have very fond memories of the P.A saying " Isiah Kiiineerrr FALEFAAAAAA!!!!!!" And then the Rangers called him up, and ever since I've rooted for him from afar. I mean, not very far, but I almost never go to Rangers games.
Which reminds me of angry angry angry I am at MLB for renaming the minor leagues. The Texas League is now "AA Central"? The Pacific Coast League is now "AAA West"? What in the world? First they took away the minor leagues' independence, and now they've taken the last thing they had, their individuality. To me it's just the last straw. It shows just how little they care about the minor leagues. The minor leagues now exist only to funnel players into the major leagues. They are the vassals, the slaves of the major leagues.
MLB is bent upon destroying the true, the free minor leagues, and something has got to be done. If the Frisco Rough Riders were an independent team, if they were free to try to win, I would be a Rough Riders fan first and a Yankees fan second. But they exist only to school players for the majors.
Rant over. Ahem. 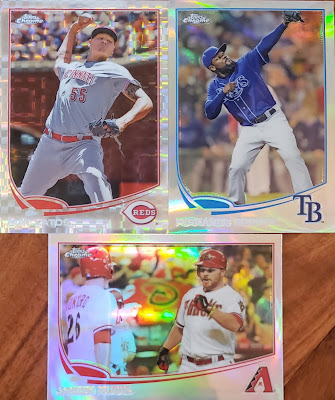 Shiny cards will help to distract my mind from the wretched way MLB is treating the minor leagues, from the dastardly, evil, Sauron-like the way MLB is.....
Deep breath, John. Focus on the cards. 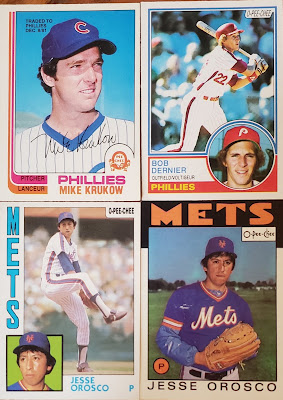 Of course, no trip to the online dime box would be complete without O-Pee-Chee. 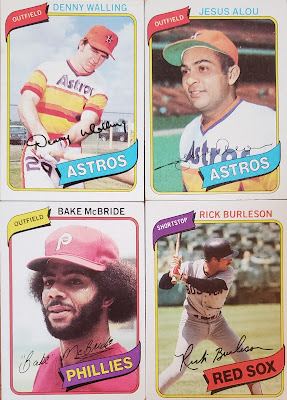 It was a nice surprise to get some just-barely-vintage cards for just a dime, especially cards as awesome as that Bake McBride. Jesus Alou is nothing to sneeze at, either. 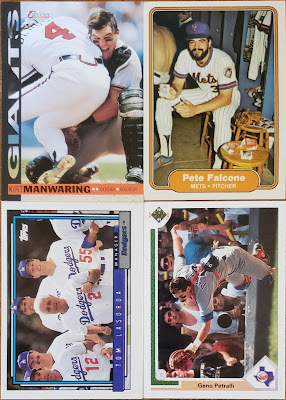 Four iconic cards, finally mine for the paltry sum of 40 cents. 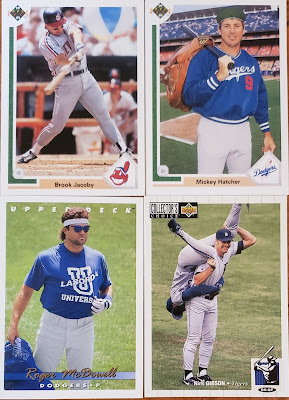 Though Mickey Hatcher is another one that has gotten its deserved attention already, the other three above I hadn't seen before, and I've never seen a card that's anything like the Kirk Gibson. 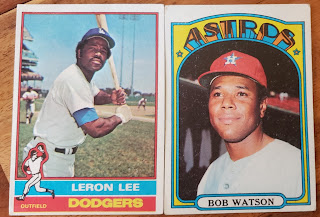 Vintage for 10 cents! Generally when I find vintage in a real life dime box, they're creased, taped, trimmed, or something, but the Leron Lee is in nice condition, and the Watson is okay.
I always feel bad about leaving cards out of posts, so I'll probably do a second post for these cards.
Thanks for reading!
Posted by GTT at 6:00 PM 12 comments:

Getting high (numbers) on Kronozio

In my first order on Kronozio, there was a high number among my cards which was priced the same as the others. After getting them, I looked through the seller's inventory in the hope that there would be more high numbers, priced just as well. To my glee, I was able to find about a dozen high numbers, along with some other cards. 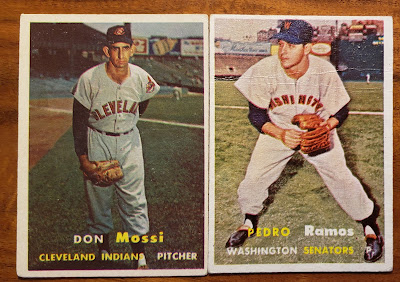 I don't know why it took so long for me to get a Don Mossi, but that '57 above was the first in my collection. The Pedro Ramos, from the scarce series, set me back just $1.40, the same as Mossi. That is the most I paid for any of the cards in this post. 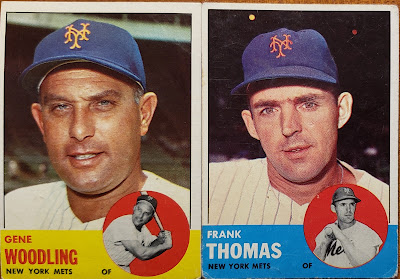 I think I'll also start working on completing 1963 Topps, and finding so many good deals on high and semi-high numbers is one of the reasons. I love getting cards of 1962 Mets of any kind, and I especially love getting semi-high short prints for $1.10!

I find it interesting how in the cartoon on the back of Thomas's card, there's a portrayal of Casey Stengel, lecturing to the Mets . It's odd because for almost all the cartoons, it features only the player, or the player with some generic figures. Casey also makes a cameo in one of my 1956 Topps Yankees. 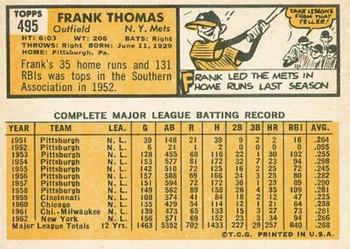 I guess Casey was pretty easy to caricature. 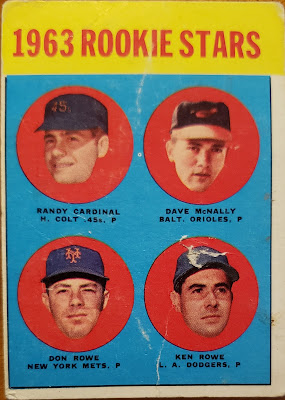 Too bad Randy Cardinal didn't pitch for the Cardinals. Anyhow, I was glad to get a McNally rookie on the cheap, because it's a high number and the cheapest copy on COMC is $22.56. 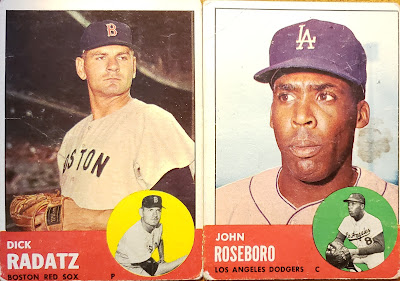 Too bad Dick "The Monster" Radatz didn't last longer, because he was incredible at his best. Over his first three years, he averaged 13 wins, 25 saves, a 2.17 ERA, and 162 strikeouts per year! The workload was probably too much for him, as he worked in as many as 157 innings in a season. What might have been. 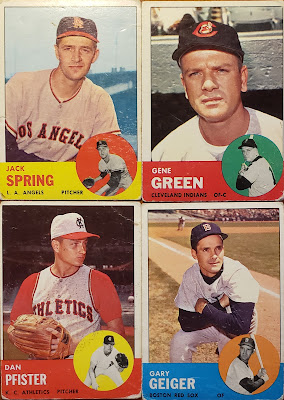 These aren't very noteworthy except for being high numbers, but they were still satisfying adds. 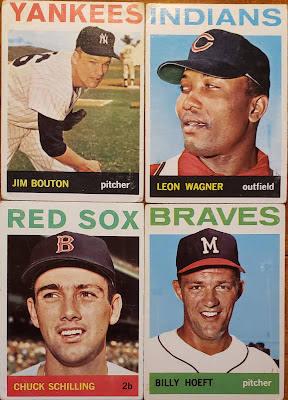 Does anyone else have the problem where, when writing a blog post, they keep on wanting to write things from The Great American Baseball Card etc. book? It happens to me all the time. I had to restrain myself from writing whooooooooooeeeeeeeeeeeeeeeee for the 1963 Roseboro a little bit back in the post. (For those who are interested in getting the spelling exactly right, it's 10 o's and 17 e's.) Now I'm tempted to just write "Jim Bouton is a big mouth" for Bouton, and repeat the passage on Daddy Wags and "Rent Your Pad From Super Dad." But I guess I'll have to resist the urge.

By now I have the book almost memorized, so these passages just spontaneously present themselves to me when I see the cards featured in the book. I've read it for almost as long as I've been collecting baseball cards, and it's been very influential to me.

The holy grail of the high numbers I got were three 1972 Topps high numbers, all of which were under a dollar. 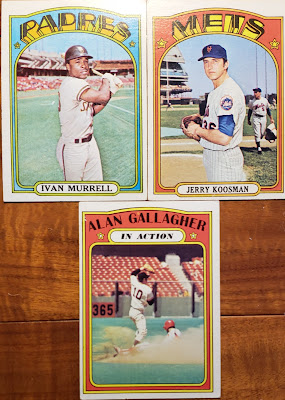 Because my dad has a complete 1972 set, I didn't need these for the collection, and by selling Ivan and Koosman, I almost paid for the rest of the cards! And I haven't sold the Gallagher yet. Think of it. 1960s high numbers, practically for free!

So that's it. I have some more 1963 Topps cards from this seller that I'm going to buy, including some more high numbers, so I'm feeling pretty happy right now.

By the way, sorry for going almost a month without posting. Half the time I've been too busy to write a post, and the other half I just haven't wanted to. I'm planning to start doing a post at least every Sunday, so hopefully that'll help me with my consistency.