I'm very grateful for the privilege of having two very good card shops not too far from me. I take it for granted sometimes, but I know that some people don't have any card shops near them at all.

And card shops definitely have advantages over ordering online. For one, you have to pay shipping ordering on the internet, which is generally a couple dollars. While that isn't exactly a lot of money, it could be used for the cards themselves, and for me it's a good part of my budget. Also, it's nice to get the cards physically when you buy them. When you order online, you place you order and then you wait. And wait. And wait. It isn't really too long usually, between a couple of days and a week, but it's enough for the time to drag.

I generally go to Nick's, which I've been going to for years, but last year I discovered another one that has good prices on vintage.

As I was in the area last week, I went with my Mom, who I thank for reading for an hour while I went through nearly all of their vintage baseball cards. It took a little digging, as that card shop has varying prices. Some are very affordable, others not so much. In the end I emerged with 27 cards, after a very  careful perusal of all the options. I'll show the cards from oldest to newest. 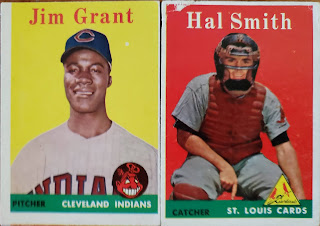 The Jim Grant rookie card was my most expensive purchase overall, at $1.20, but I think it was worth it. For one, he was a pretty good pitcher, plus his nickname was Mudcat. Nicknames don't get too much better. Hal Smith had a pretty nice card that year, with the old time catchers gear, not to mention him giving a sign to the imaginary pitcher. 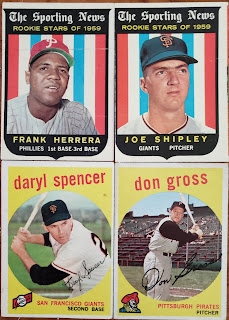 I've finally decided to officially collect 1959 Topps, and this shop is the reason why. For some reason, I feel like 1959 Topps is always priced more affordably compared to other sets. It's also a pretty nice looking set, with a good design, good backs ( which is very important to me), and interesting photography. Don Gross is an example of good photography, as it's always nice to see a pitcher posing with a bat.

Frank Herrera, whose rookie card I got, had a short major league career, but hit 321 home runs in the minor leagues. 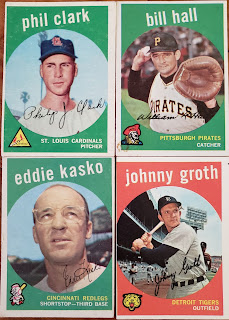 The 1959 cards I got this time pushed my total to 54 cards, nearly 10% of the whole set. I've been very surprised at how many I have. Of all the sets I'm actively trying to complete, I've definitely gotten the farthest for '59 Topps. I like the background on the Johnny Groth card, especially the guy standing right behind him. 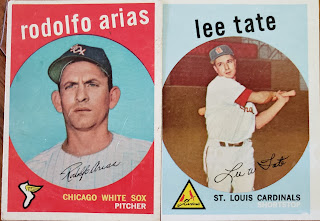 Of all the cards I got, these two were my favorites. They look like mere commons on the front, but when you turn them over they disclose the reason: They're high-numbers, my first of the set! I was especially pleased because they were just 60 cents each, a real steal. 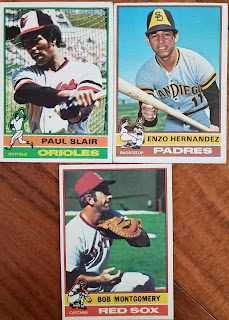 They have very good prices on their '70s cards, which is nice. All the '70s cards I got were 10 cents each, except for Bob Montgomery, who was 16 cents. 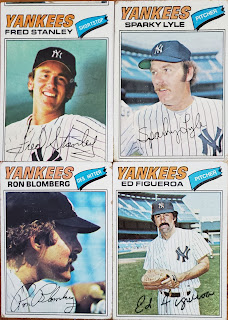 These 4 yanks aren't exactly in mint condition, and my Dad might have them already, but I just couldn't pass up the quartet above. Sparky Lyle was the best of the 4, pitching in the majors for 16 years, and he was in his prime at the time this card was made, winning the 1977 Cy Young award. 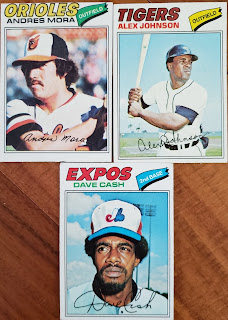 Of these 3 I was especially excited to get Andres Mora's rookie card. Though he didn't have much of a major league career, he played in the Mexican League until 1993, hitting 435 home runs in his minor league career, placing his name among the greatest minor league power hitters ever. 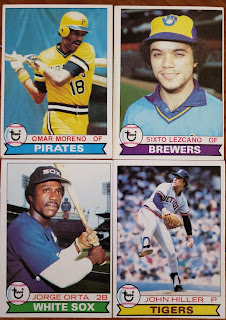 For as long as I can remember, I've been fascinated by the name Sixto Lezcano. Sixto sounds a lot like six toe, which highly appealed to my sense of humor back then. The full name has a very nice ring to it.

Overall, it was a highly productive trip to a card shop.

A few weeks ago it suddenly dawned upon me that baseball exhibit cards are very affordable. To give a little background in case you don't know about them, exhibit cards were released in several different series from the 1920s to the 1960s. The most common one was released from 1947-66. I already exhibited the Bob Feller I got from the 1939-46 series on this blog back in March.

As I was saying, it dawned upon me how cheap they were, and I decided to get a couple off Ebay. I picked two hall-of-famers, both who were about $5. Now, I understand why they're so inexpensive. They're black and white, they're oversized, and they were produced over multiple years, so they're not too hard to find. However, I think they're still good buys. Without further ado, the cards: 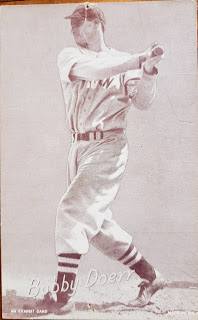 This was my first card of Bobby Doerr released in his playing career, so that was pretty cool. I wanted one, and this was his cheapest. 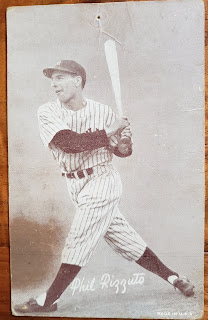 Though this isn't my only playing career card of "The Scooter", it's not like I have many. As you can see, the condition of either of these isn't great; there are pin marks on the top of both, and other stuff. The dark spot by Rizzuto is some sort of stain, but I don't mind it too much as it's not on Rizzuto himself. Overall, I think the condition on these is acceptable, and they didn't blow out my budget. However, I think next  time I'll buy some more colorful cards.