Well, actually, to be accurate, my 1st post was on November 18th 2018, so I'm off by a week. Oh well.  Anyway, this is my 54th post in my 53 weeks of blogging. In my 1st post I said that I'd try to post at least once a week, so that was pretty close. However, that number was inflated by 17 posts in January, many of them of a below average quality, and I haven't posted more than 3 times in a month since March, so I guess I haven't done that well in quantity.

However, I really think I've gotten better as a writer since starting my blog. I mean, the 1st thing  I wrote on this blog was " Hello, I my name is John,". That wasn't exactly what I meant to say. Hopefully I'll continue to get better in quality and quantity over the next year.

And, finally, thanks for reading.
Posted by GTT at 5:37 PM 2 comments:

I turned 13 on Sunday, which produced  13 1951 Bowman Yankees, and some money from my sister. I really like 1951 Bowman, and I always enjoy getting Yankees cards from way back when, so I think I got a pretty good haul.

Joe Page was the 1st modern reliever closer, leading the league in saves in 1947 and 1949, with 17 and 27 respectively. He also finished 4th and 3rd in the MVP voting those years. However, he pitched badly in 1950, and spent 1951 in the minors. He got back to the majors for 7 games with the Pirates in 1954, but was released. I also really love the background on the Joe Page card. 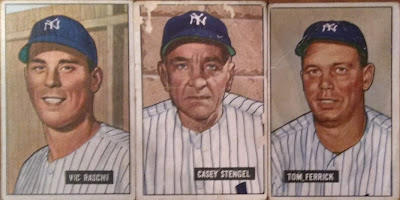 I was surprised when I saw I had gotten a Casey Stengel 1951 Bowman card. I was just reading Robert Creamer's biography of him a few weeks ago, and I liked it. 1951 was just his 3rd year managing the Yankees, with 9 more to come. I also enjoyed getting the Vic Raschi card. He won 21 games that year, and also lead the league in strikeouts, not to mention finishing his career with a 132-66 record. 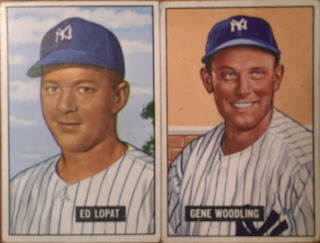 The 1951 Bowman Gene Woodling is actually his rookie card, although he debuted in 1943. Imagine a thing like that happening now, when everybody who has a 10 major league games to his credit gets a rookie card. Eddie Lopat was the resident junk-baller of the American League at the time, and it definitely worked for him. Casey Stengel said that it looked he was throwing wads of tissue paper, and also said "Every time he wins a game, fans come down out of the stands asking for contracts." He obviously wasn't blowing people away, but Eddie Lopat won 21 games in 1951, and 166 for his career. 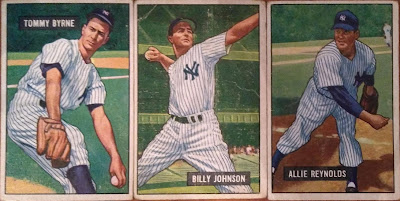 For these three I'll just let the pictures speak for themselves, except to point out that Allie Reynolds     (182-107) was just as good as Lefty Gomez (189-102). However, Lefty is in the Hall of Fame while " Superchief" isn't. Allie Reynolds was probably even better. Go figure. 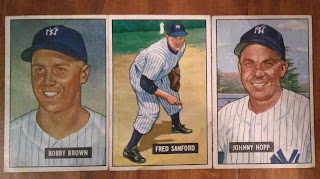 The background for the Bobby Brown card is really nice in person, though it doesn't look as good on the computer. Anyway, these are the last three cards. I really like these '51 Bowman Yankees, and I'm glad that my mom and dad got them for me.

Note on the title: I couldn't think of anything for the title, so my mom suggested the title I used.I generally like quieter titles, but I don't think it sounds too bad.