To explain why I'd been searching for a 1930 Zeenut Clyde "Tub" Perry for years requires some explanation. I'm not related to him. I have no connections with him at all. His pro career was short and mediocre: a 7-7 record with a 6.02 ERA for the San Francisco Seals in 1930 and that's it. He didn't become a TV star after his career; nothing.

The answer lies in an odd direction: semi-pro baseball. Up until about 1950, there wasn't much of a difference between the low minor leagues and semi-pro ball (town teams, or teams sponsored by businesses.) The quality of semi-pro ball ranged from completely amateur leagues to competitive leagues filled with major and minor leaguers.

Though Tub Perry's pro career was short, he had a long and distinguished career as a pitcher/outfielder in one of my favorite semi-pro leagues, the Sacramento Valley League. It has a special place in my heart because it was the league that got me interested in semi-pro ball, but it was also a very good league, equivalent to a good D league at the time.

His first year in the league was with Dunnigan in 1924, and he played in the league until 1950. It was a league filled with future or former Pacific Coast League players, but he absolutely dominated.

To summarize, he's my favorite semi-pro player and I'd been looking for his 1930 Zeenut card for a long time. The problem with that, as some of you know, is that finding any individual Zeenut card is almost impossible.

I kept a lookout on eBay, on forums, on COMC, and at card shows, but never saw it.

I found one in an odd way on Net54. There was a thread on the 1950s minor league Globe Printing sets, and I casually mentioned that I'd been wanting Clyde Brud Perry's card in the set as he was the son of Clyde "Tub" Perry. A member asked if I had Tub's Zeenut card. I didn't, but he did, and it was available for sale! 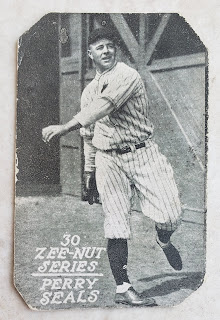 Its corners were lopped off, but overall Zeenuts don't get much better., The price was reasonable, and I bought it without qualms. And, to make my happiness untainted with practical matters, my grandpa paid for the card.