For me, Kit Young has always been one of those names that I hear about, but never really think about as an option for buying cards. However, recently my Dad called me over to the computer to show me the site, and it turned out they had good prices for 1933 Goudey. Intrigued, I probed deeper, and was able to find 8 cards for a good price. Here they are: 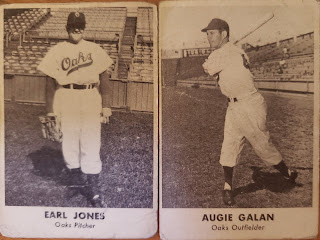 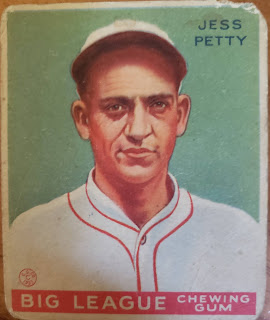 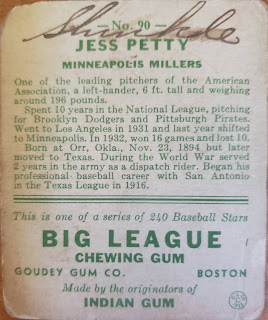 It also had an "autograph" on the back, which I don't mind.

I got very good prices for the Red Man tobacco cards. Though it's tough to find even commons for $4, none of the four I got cost more than $3. They aren't mint or anything, Nellie Fox has some heavy creasing, but not too bad. I was very happy to get cards of both Fox and Bobby Avila. Though Avila isn't very well-remembered nowadays, he actually was a very good player for a while there. In 1954, the year of his Red Man card, he won the AL batting title with a mark of .341.

The Whitey Ford was what really sealed the deal, I think. I could hardly believe that an early career card of a Yankee hall of famer from the '50s was just $3, even if there was some heavy creasing. Hank Bauer was appreciated, if not as spectacular. 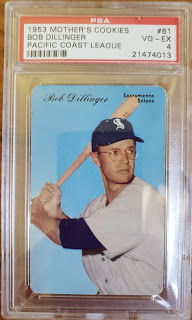 I was really happy to get this card. I'd always wanted a Mother's Cookies card from the '50s, and I was finally able to get one at a good price. Despite it being in good condition, graded, and a guy who hit .306 in his major league career, Bob Dillinger was priced not much more than a beat-up common usually is. Bob Dillinger actually had his best season in the Pacific Coast League by far in 1953, as he hit .366 with 236 hits in 171 games. For comparison, he hit .287 in 1951 and .301 in 1954.

Overall, I was pleased with my order. The prices were good, and though the shipping was a bit above normal ($7), the cards came on the same week as I ordered them, so I can't really complain. 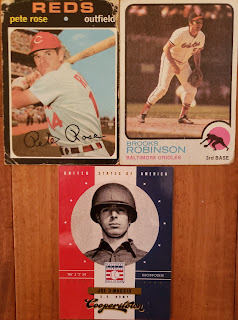 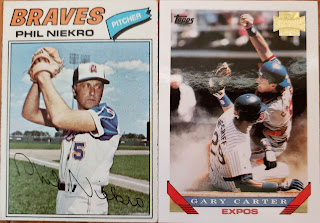 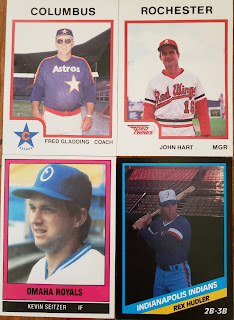 Getting serious about 1933 Goudey

I've always loved 1933 Goudey, and a couple of years ago I decided that I'd try to complete it. However, that project went on the back-burner after getting 5 cards as I decided that with $10 prices for commons, and 4 Babe Ruths, it wasn't going to happen.

I thought about it more this spring, and I realized that if I sold the cards I have that I don't need or want, I could get a hall of famer or two and some commons. That's gone alright so far; I've definitely made some progress. Here are the cards I've gotten so far in my Goudey quest part II: 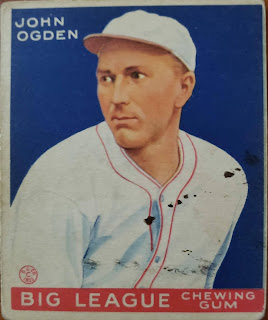 His career was winding down by 1933,  his last year in pro ball outside of 1 inning in 1934. Ogden was featured as an Oriole on his Goudey card, because Goudey included some minor leaguers in the set. Here's the back: 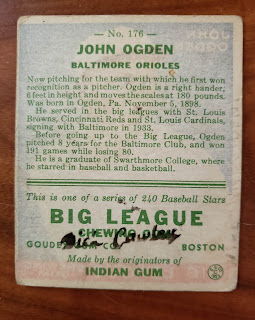 It looks like this card was once owned by a certain Dick Cawley. Whenever something like that happens I always Google the name, hoping that the person went on to fame or something. No luck yet. 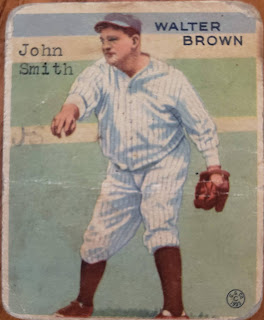 Same deal here, though I just got a boring name. John Smith, I mean. It would have been so much more interesting if I got Isaac Jablonowski, or something distinctive like that. This was my 3rd Yankee from the set, which I was happy to get for just $7. Walter Brown, or "Jumbo" Brown as he is more well known, was the heaviest player ever until C.C Sabathia came along, tipping the scales at 295 pounds. He led the league in saves twice later in his career with the Giants, but you have to understand that his league-leading totals were 7 and 8 respectively. 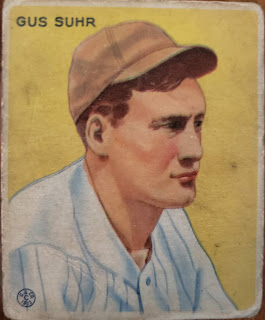 Gus Suhr had another interesting story. In 1929 he came out of nowhere to lead the Pacific Coast League, which at the time was the top minor league, with 51 home runs. It just was a fluke; he had never hit more than 27 home runs in a minor league season before, and his major league high was 17. Even funnier was that he played regularly for 3 years in the PCL during war time, and hit the grand total of 1 home run in the 3 years combined. You could look it up, as Casey Stengel used to say.

He wasn't a bad player in the majors though; he played 11 years in the bigs and led the league in games played 3 times. 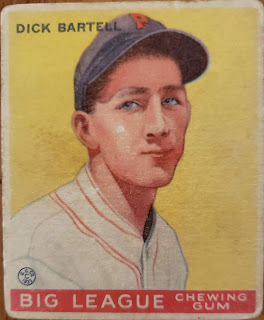 Dick Bartell had the best major league career of the guys I got in this round of Goudey's, playing for 18 years in the major leagues, with a career batting average of .284, pretty good for a infielder. This one was actually completely funded with cards I sold on Ebay, so that was nice. It's a nice card, though, really, they all are. 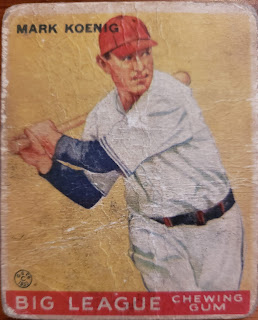 This card is definitely the worst conditioned '33 Goudey I've gotten so far. Oh well. As I've recounted a couple times, I'm a Stratomatic player, and the '27 Yankees is the team I play with the most. Mark Koenig was the starting shortstop for that team, so I've developed an appreciation for him. When you play Stratomatic with a player, you really get to know them better. I know Koenig as He Who Never Does Any Thing But Hit Singles.

That batch of 5 cards gave me 10 total. I still have 229 left, including a lot of hall of famers, not to mention 6 cards of Ruth and Gherig alone. I probably won't finish it unless I get a really good job when I grow up, but you never know.

And in any case, it's a great set.