Branching out at the local card shop

There was a time, and not terribly long ago, when I thought that I had explored pretty much all the different things Nick's (the card shop near me), had to offer. The 1950's cards were generally a bit more than I wanted to pay, not so much because they were overpriced, but because they were mostly in very good condition. Outside of that, I thought, there wasn't a whole lot else.

Part of it was that I don't go to Nick's that often, so when I did, I generally covered the same ground. This time, I also looked through some cards from the 60's (I'm really not sure why I'd never done that before), and I think I did pretty well. I didn't look through a whole lot, but I think what I got was pretty good. 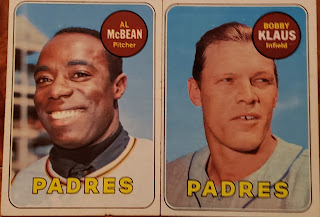 I've always liked the design for 1969 Topps, especially the circle for the player's name. The Bobby Klaus is an interesting card, as he never played for the Padres, and spent 1969 in AAA in the Pirate's system. My best guess for his inclusion as a Padre is that he had spent the previous 3 years for the San Diego Padres when they were a minor league team. Though he posted low batting averages for them, he had  walked from 107-154 times for each of the previous 3 years. 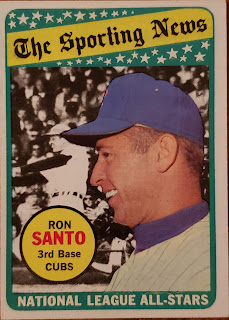 I thought this card of Hall of Famer Ron Santo was a good deal at $1. 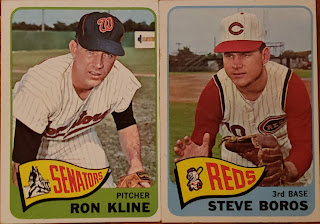 Nick's vintage cards are generally in very nice condition which is nice. 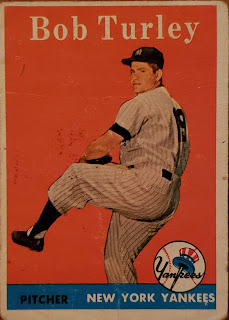 I was very happy to get a card of Bullet Bob Turley, who won the Cy Young award that year. The card is in rough condition, but that was the reason I got it for a dollar, so I'm not complaining. 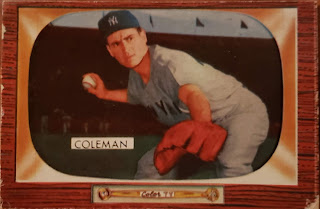 I was going this way and that on whether to get this card, because I thought my Dad might already have it, but as it was $2 and a Yankee from 65 years, I decided to get it. It turned out that my Dad does already have this card, but it's still a good purchase.

I also did what I've never done before: I actually bought a football card! I know there's many people who collect both football and baseball, but I'm for the most part a one sport guy. However, when I saw these vintage football cards at 50 cents each, I thought it would be good to get a couple. 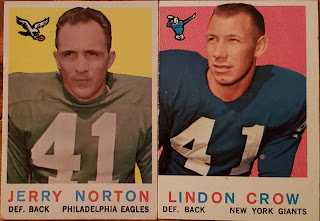 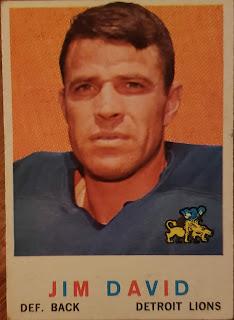 Because I know almost literally nothing about football from way back when, I'd never heard of these guys, and just assumed they were mediocre players. However, when I looked them up, it turned they were actually all pretty good ( pro-bowlers and all-pros and stuff like that.

I also went to Nick's on Saturday, and got some very good stuff, but as it's getting late and I want to get this post out tonight, I'll tell about that hopefully on Friday.