I haven't forgotten about you, 1959 Topps

My post before last saw me finally completing the 1969 Topps Deckle Edge set. The other set I've been working on, 1959 Topps, has been going slowly but surely. Including the cards I have sitting in COMC's warehouse, I'm over a quarter of the way through the set, at 159/572, or 27.8%.

I've been able to find some very good deals on Net54. For $19 I got an 18 card lot of 1959 cards in very nice condition, including Richie Ashburn. Watching the binder pages starting to fill up is extremely satisfying. 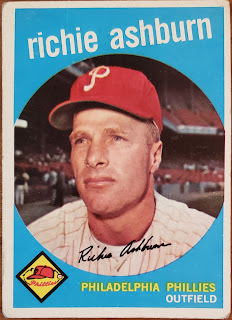 Richie isn't in the best shape, but my set is rather short on star power, so I'll take it gladly. 1958 was Ashburn's best season, as he hit .350 with a league-leading 215 hits and also league leading 97 walks. 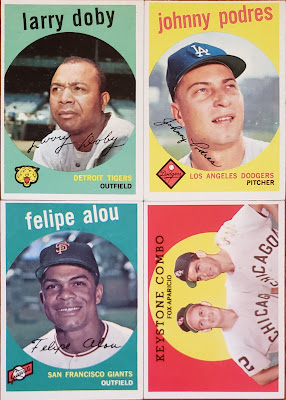 I like the variety of emotions shown on these cards. That's Felipe Alou's rookie card, and he just looks happy to be on a Topps card. Johnny Podres looks a little bored. Larry Doby just looks angry, and I don't know if I can blame him. As the first African-American in the AL, things were not always smooth, and by 1959 he was washed up, playing for the Detroit Tigers, and didn't even have a hat on. 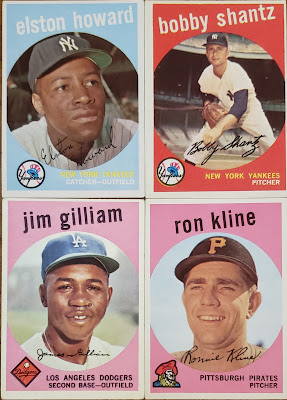 I love the Howard and Shantz cards. The pink pair, not so much. What's pink doing on a baseball card? Actually, the Gilliam is a nice card, but there's a big printing flaw right by his nose, which is a bit annoying. 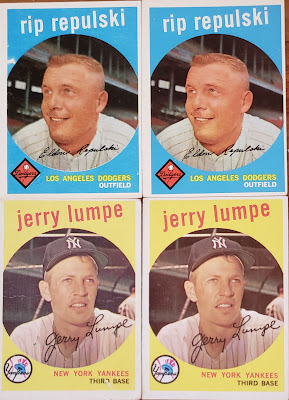 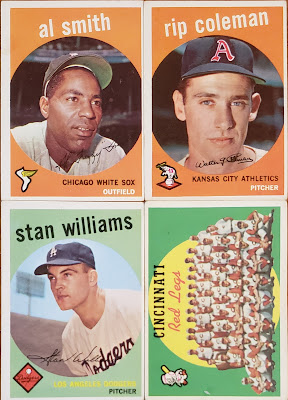 A slightly bland final four for this batch of '59s. This is Stan Williams's rookie card. He would appear in Topps sets until 1972. Looking at his cards, I just realized that Stan belongs to the Topps Yankee swamp of difficulty, with others such as Bob Friend, Bob Schmidt, and Bob Meyer, as his only playing career card in pinstripes is a high number.

Because I'm already posting about 1959 Topps cards, I might as well feature a few of my COMC cohort. I've been looking for as many cheap high numbers as I can get, and have managed to get quite a few for $1.25, or even cheaper. In other words, success.

So I guess what I'm saying is that, despite their ridiculous shipping times and all that stuff, I can't stop buying on COMC because of the deals I find sometimes.
Posted by GTT at 6:50 PM